The biggest and most compelling news story, of course, is the coronavirus.  And yet there’s an undercard political story that’s also interesting: What will the Democrats do about Joe Biden?

That is, what will they do if they come to believe that their presidential candidate is too ill—or, to be precise about it, too old—to run effectively in 2020?  And perhaps to lead the nation effectively thereafter?

Without a doubt, concern is in the air, as these headlines attest: “Biden consolidates support, but trails badly in enthusiasm: Poll”;  “Democrats fret as Joe Biden becomes ‘irrelevant’ in coronavirus crisis”; and “Obamaworld veterans not sold on Biden coronavirus campaign approach.”

Meanwhile, lurking in Biden’s background is a sexual assault allegation from 1993, which surfaced just on March 25.  The accuser, Tara Reade, is very much alive and willing to do interviews—and so what to expect, next, from her?  Will the MSM take her story seriously?

And Tucker Carlson, certainly not a Biden fan, said the other day that Biden “Has some some form of recognizable dementia.”  In response, some on the left seemed to agree; pro-Bernie Sanders podcaster Joe Rogan said of Biden on March 28, “Trump is going to eat him alive.”  As Rogan put it not so delicately, Biden’s “medical condition” will be his downfall. 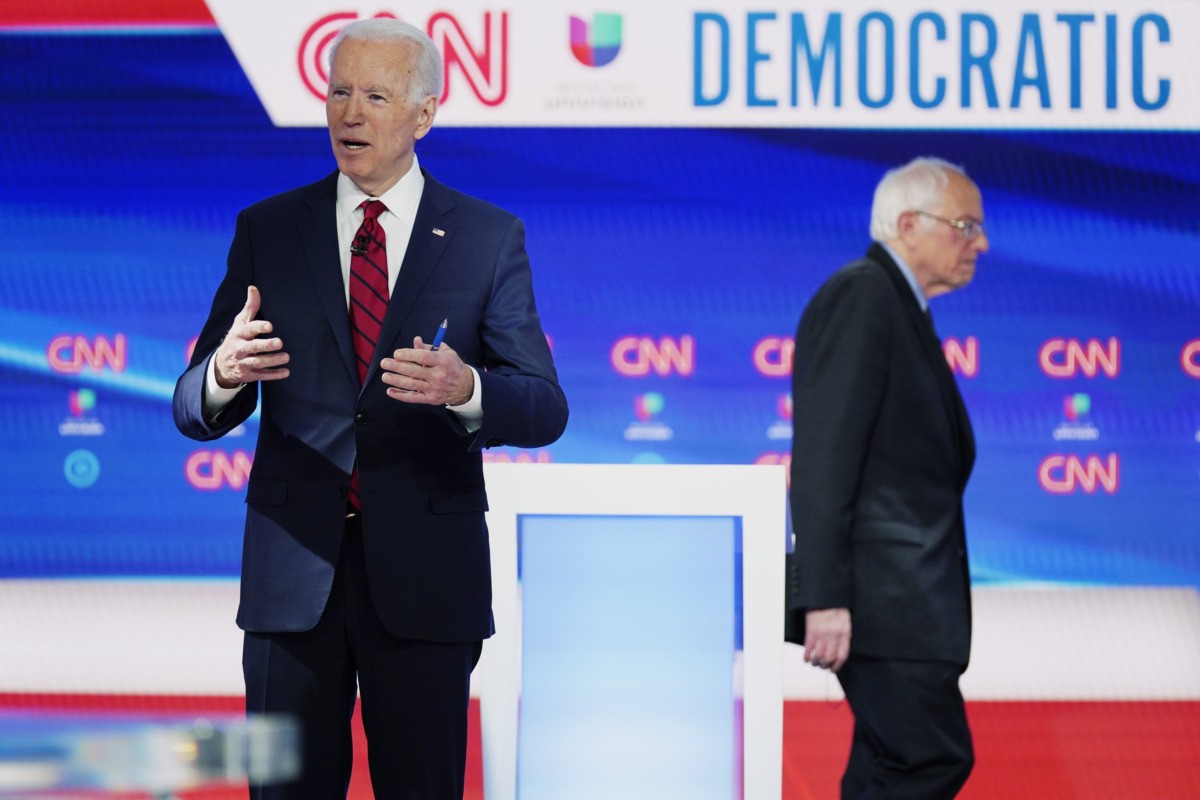 In this dicey environment, even flubs that anyone might make—on March 24, Biden  referred to Massachusetts governor Charlie Baker as “Charlie Parker”—become a news story. Also on March 24, CNN’s Jake Tapper reminded Biden of the correct way to cough.

To be sure, plenty of Democrats don’t care whether or not Biden is fit for the presidency; they support him because the polls have suggested that he is the best candidate to defeat Donald Trump. Hence media figure Alex Wagner wrote recently, “Stay Alive, Joe Biden.”  That was all she asked of him; she conceded, “It’s as if Biden exists primarily as an idea, rather than an actual candidate.”  And the idea for Trump-haters, of course, is Win in November.

Yet these Democratic desires are unsteadied when Biden is unsteady.  That is, when he looks so unsteady that he might lose the November election.  Thus Democrats were jolted on March 29, when a Washington Post/ABC News poll showed Biden with a thinning lead over Trump, 49 percent to 47 percent.

Can the Democrats Find a Replacement?

New York Post columnist Michael Goodwin is hardly a Democratic insider, and yet he nevertheless offered Democrats some good advice on March 28, writing that they should enlist former president Barack Obama to convince Biden to step aside, allowing the party can find a stronger candidate.  As Goodwin said uncharitably of Biden’s recent basement-video appearances, “Looking isolated and lapsing into occasional gibberish, he seemed ­every bit the mentally challenged 77-year-old he was on the worst days of the campaign.”

For his part, Goodwin mentioned three possible substitutes for Biden: Andrew Cuomo, Nancy Pelosi, and Hillary Clinton.  Of these, we can say that Cuomo, in the middle of New York’s virus vortex, is looking strong these days.  In fact, the betting site PredictIt shows Cuomo—even though he’s not in the least bit diverse—in second place among Democrats.  And as for Pelosi and Clinton, well, let’s just say that, most likely, Goodwin was trolling when he threw their names out.

Yet perhaps what’s most notable is that Bernie Sanders was not on Goodwin’s short-list.  And that’s because Goodwin, and everyone else, knows that Democratic insiders hate Sanders.

So even if top Democrats are trying to figure out what, if anything, they can do about Biden, they are not going to turn their party over to the socialist senator—who has, after all, made it a point of pride that he himself is an independent, not a Democrat.

Meanwhile, Democratic pros have gotten one good break: It’s quite possible that the Democratic National Convention, scheduled for July 13-16 in Milwaukee, might have to be canceled—and if it doesn’t have to be canceled for health reasons, the Democrats might choose to cancel it for political reasons.  Why?  Because having no physical convention means that the party’s gathering site won’t be infiltrated by, and surrounded by, thousands of Bernie Bros and related Antifa types.  That is, a “virtual” convention could “meet,” pick a nominee other than Sanders—and the Sandersistas would have no obvious target at which to aim their rocks and molotov cocktails.

To be sure, there’s no scenario whereby separating Biden from the 2020 nomination would be easy.  Perhaps Barack Obama would do some quiet nudging–it’s notable, after all, that he has never endorsed Biden–and perhaps Michelle Obama might nudge, too.  (And yes, if she were interested in running in ’20, she’d win the nomination by acclamation.) 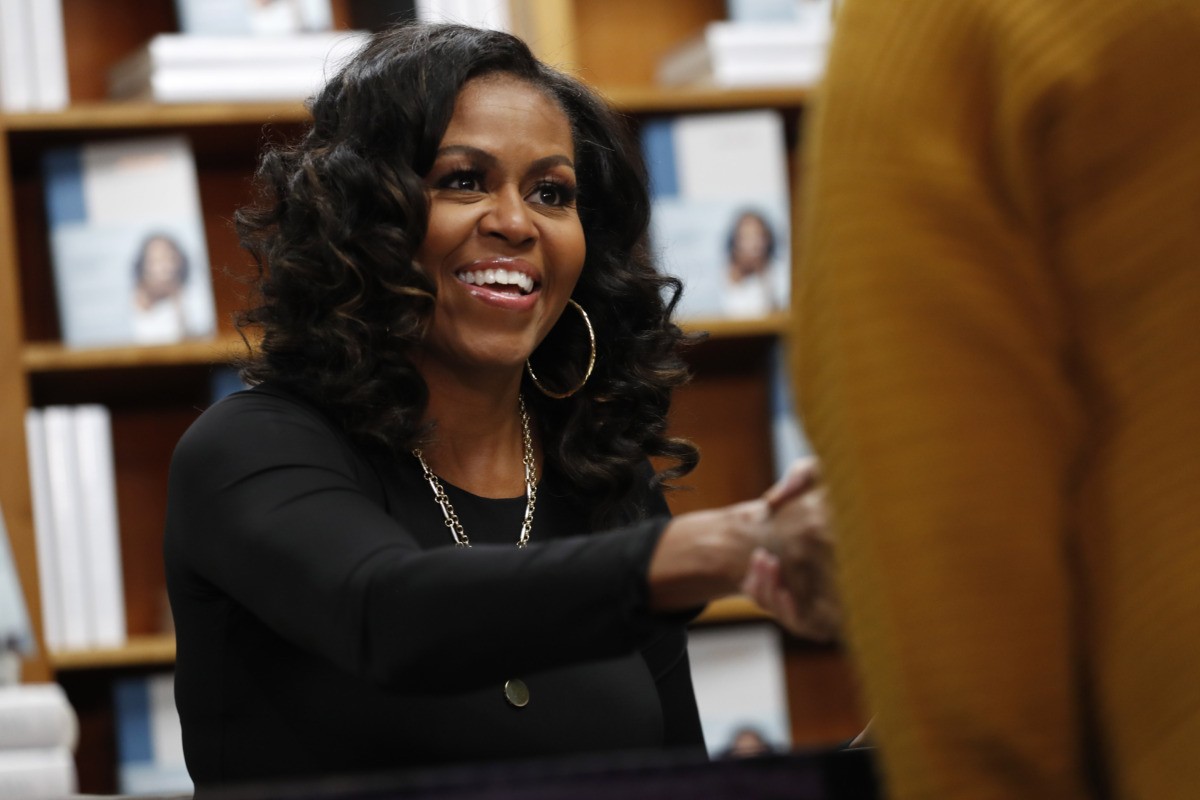 Still, it’s hard to see how Biden would go along with any possible entreaties to drop out.  Unless, of course, he’s had a change of heart–or mind.  That is, maybe the prospect of campaigning for the next eight months, and maybe governing after that, might now seem, er, daunting to him.

Yet even so, there are all those other Democrats—all 20 or so of them, many of them diverse—who did run for president this year, unlike Cuomo, or Michelle Obama, or anyone else the Democrats might now be eyeing.  And some of them even won delegates. Would these Democratic hopefuls really be okay with, say, Cuomo?  Or would they demand that it be one of them?  And if it were to be one of them, which one of them? 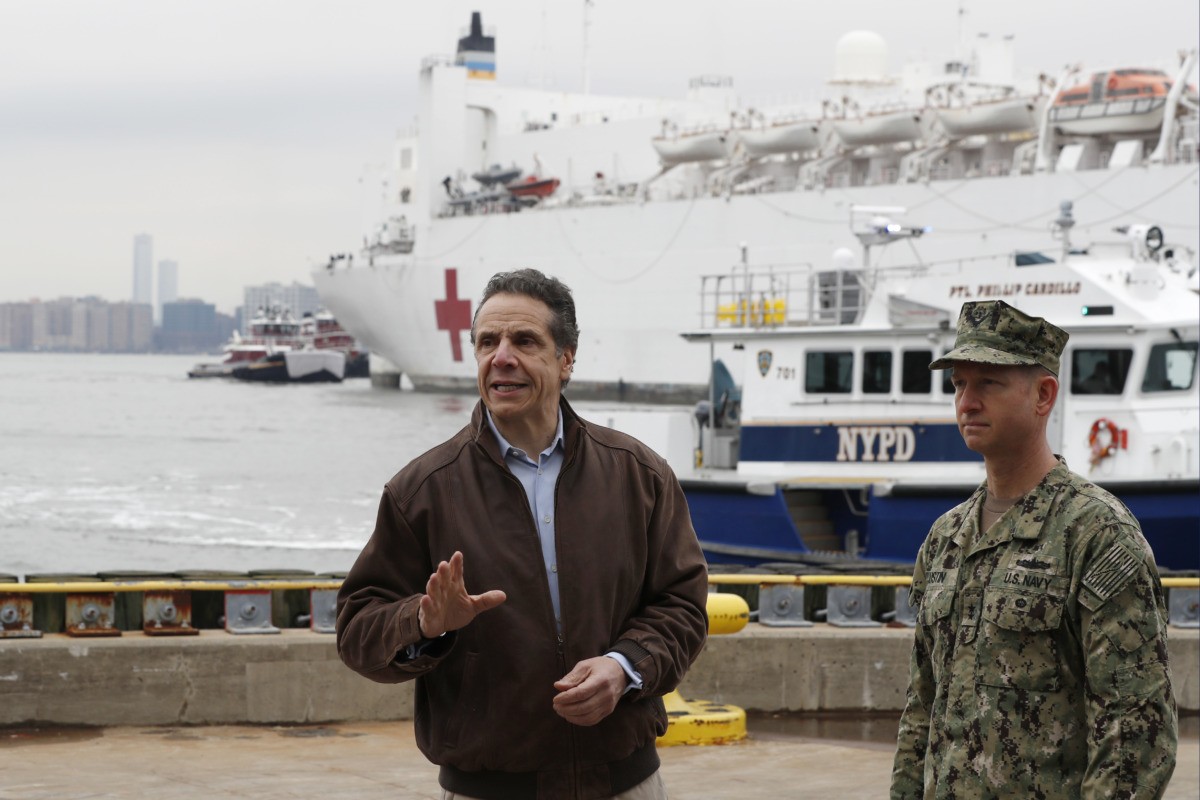 New York Gov. Andrew Cuomo, left, during a news conference with Rear Adm. John B. Mustin as the USNS Comfort, a naval hospital ship with a 1,000 bed-capacity, pulls into Pier 90 Monday, March 30, 2020, in New York City. The ship will be used to treat New Yorkers who don’t have coronavirus as land-based hospitals fill up with and treat those who do. (AP Photo/Kathy Willens)

So we can see: It’s far from clear that the Democrats can stop Biden from claiming the nomination.  And it’s possible, of course, that he could win in November—even if he stays in Wilmington, Delaware, for the next eight months, appearing only perhaps as a hologram.

And if so, then the Democrats have some more thinking to do; specifically, they need to think about who they want as Biden’s running mate.  Because, you know, incapacity and mortality are things.

So what can Democrats do? Can they do anything about Biden? Anything at all?

The answers to those questions are as unclear as Biden’s syntax.  And yet still, Democrats might draw inspiration from a clear reading of their own party’s history, thinking back to a time when careful planning and plotting paid big dividends.

Way back in 1944, they faced a similarly grim problem with an unhealthy nominee, and they developed an effective workaround.

As recorded in Truman, David McCullough’s 1992 biography of the 33rd president, by the end of 1943, top Democrats had concluded three things: first, their best hope to hold the White House in the 1944 presidential election was for President Franklin D. Roosevelt to run for a fourth term; second, FDR was in such ill-health that he was unlikely to survive another four years in the White House; third, the incumbent vice president, Henry A. Wallace, had to go.

By 1944, Roosevelt was 62—and yet he was an old 62.  Having been stricken with polio in the early 1920s, having been in the White House since the early 1930s, FDR was both frail and exhausted.  The treasurer of the Democratic Party, Edwin Pauley, predicted that the president would live no more than another year.

So that put Vice President Henry Wallace under the spotlight—and he was found wanting.  He was regarded as too left-wing (he seemed weirdly sympathetic to the Soviet Union), too mystical (he was in thrall to various gurus and seers), and too non-political (he liked to sit by himself and study plants and languages).

And yet at the same time, removing Wallace from the ’44 ticket would not be easy. He was handsome and well-spoken. Moreover, having earlier served as secretary of agriculture when the New Deal was saving millions of family farms, he had a wide following—and he was a particular favorite of First Lady Eleanor Roosevelt. 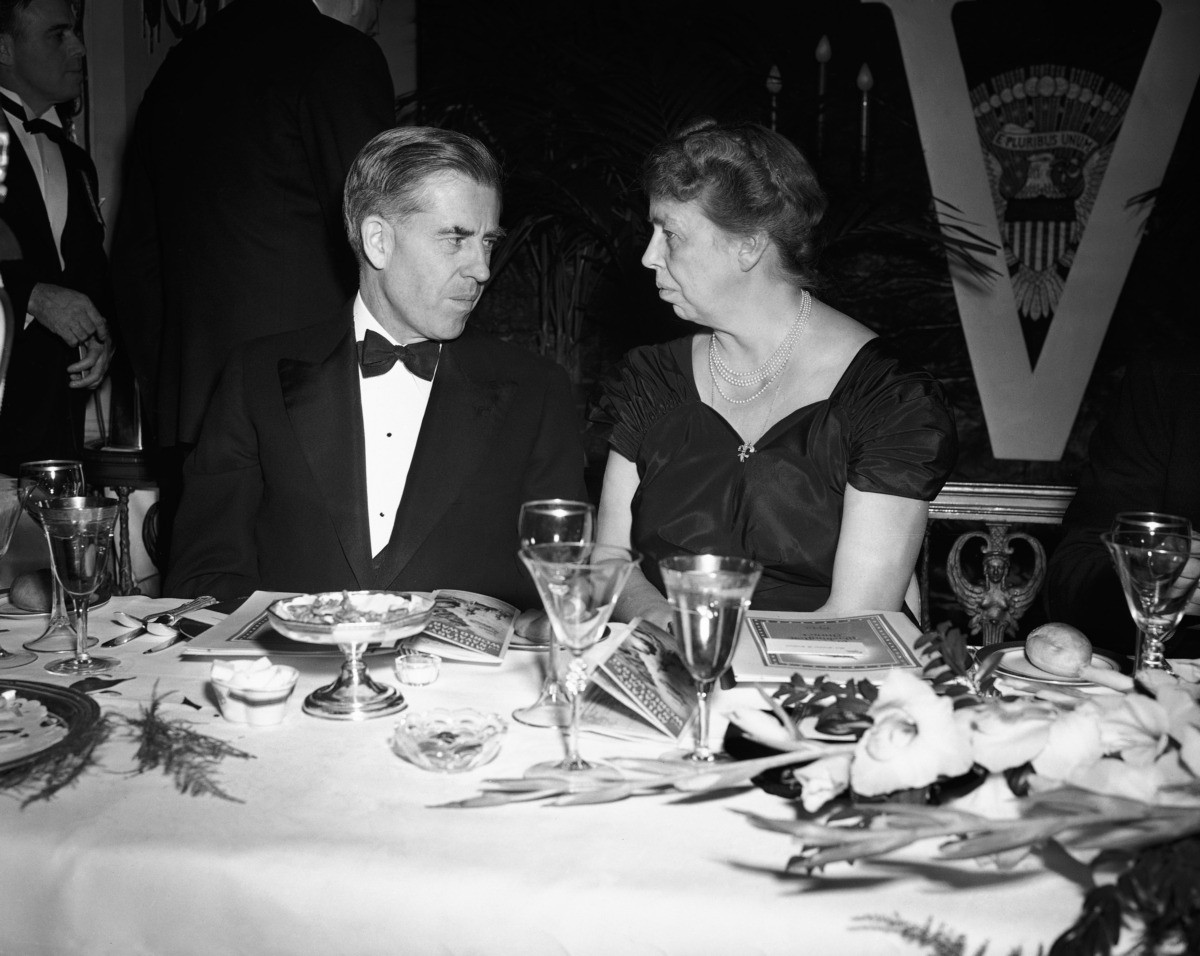 First lady Eleanor Roosevelt with Vice President Henry A. Wallace at a dinner in Washington, DC, on Feb. 23, 1942. (AP Photo)

So Democratic operatives had a lot of work to do. They spent the first half of 1944 making sure that FDR would, in fact, run again, and, at the same time, making sure that he would have a new running mate. And, of course, all this wheeling and dealing had to be done in secret.

The big question was who to swap in for the vice president. Names under consideration back then included top White House aide James Byrnes, a former senator from South Carolina, as well as former Supreme Court justice; House Speaker Sam Rayburn; Senate Majority Leader Alben Barkley; Supreme Court Justice William O. Douglas; and shipbuilding tycoon Henry Kaiser. In fact, FDR even flirted with the idea of bringing on his Republican opponent from the 1940 presidential election, Wendell Willkie.

Yet one by one, for various reasons, these names were struck from the list.  And so, almost by default, another vice presidential possibility emerged: Sen. Harry Truman. As one Democratic boss, Edward G. Flynn, wrote of Truman:

His record as head of the Senate Committee [investigating wartime profiteering] was excellent, his labor votes in the Senate were good, on the other hand, he seemed to represent to some degree the conservatives in the party, he came from a border state, and he had never made any “racial” remarks. He just dropped into the slot.

Truman was nominated at the Democrats’ Chicago convention in July 1944; the Roosevelt-Truman ticket was victorious in November—and FDR died in April 1945. 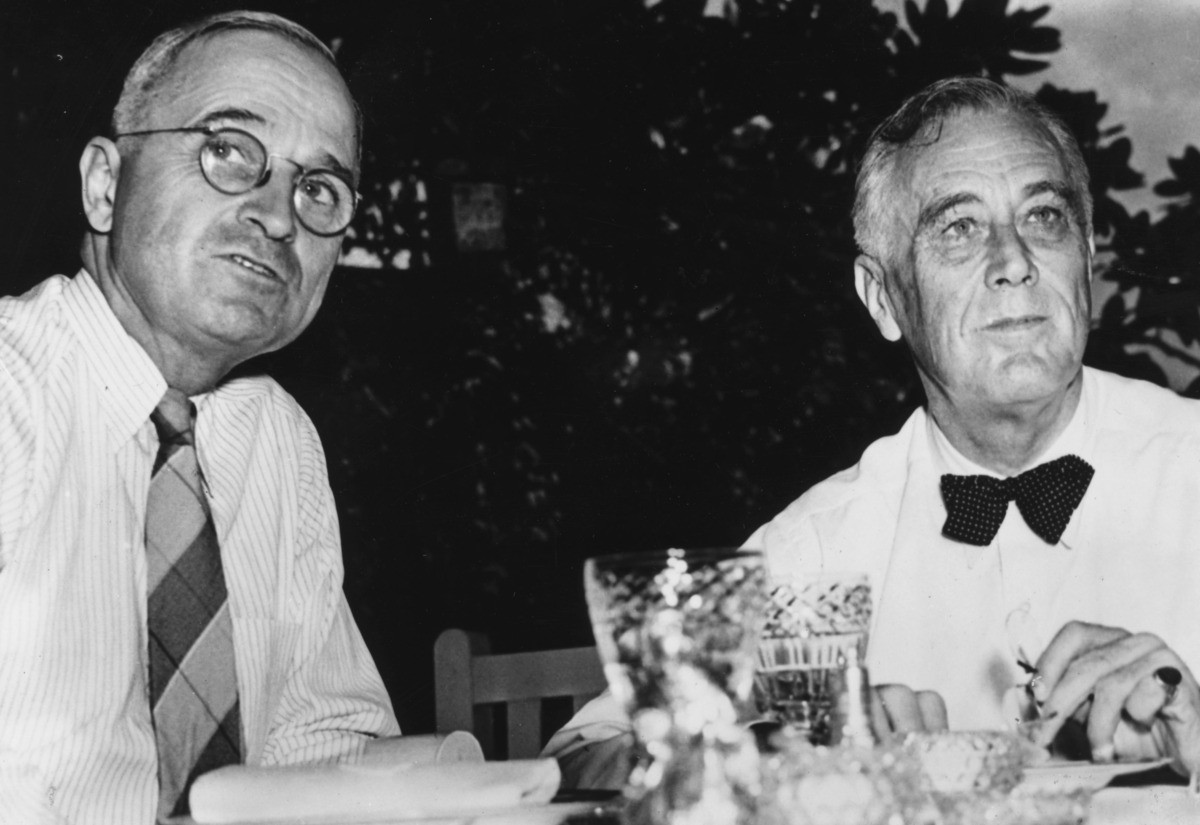 Upon becoming president, Truman would lead America to victory over Japan, and then would lead the nation through the beginning of the Cold War.  And he himself would win a big presidential victory in 1948, ultimately staying in the White House until 1953. While Truman’s presidency was certainly bumpy at times, he is now regarded as one of our greater presidents.

So if the Democrats can’t, or won’t, help Biden slip off to do something more restful, then they have to think hard about his running mate.  That is, pick a good one, just as they did in 1944.

Because the choice they make, for better or for worse, could redound for decades.