Public Enemy group leader Chuck D has endorsed Sanders and was expected to perform Sunday evening for a capacity crowd at the Los Angeles Convention Center.

(Fellow Public Enemy member Flavor Flav sent a “cease-and-desist” letter to the Sanders campaign, claiming that Chuck D did not represent the group as a whole.)

Many of the group’s songs have a political edge. Some of their classics include “Fight the Power” (the official slogan for Sunday’s rally in L.A.) and “911 Is a Joke.” 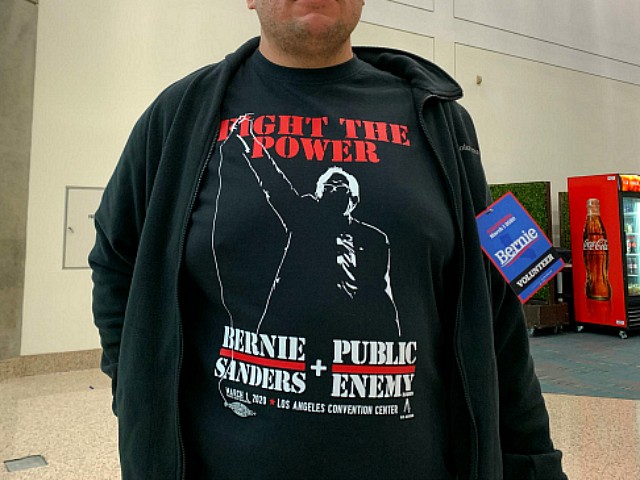 Chuck D explained the group’s crosshairs logo in 2014 in an interview with Rolling Stone: “The crosshairs logo symbolized the black man in America … A lot of people thought it was a state trooper because of the hat, but the hat is one of the ones that Run-DMC wore. The B-Boy stance and the silhouette was more like the black man on the target.”

As such, the logo is a protest, not an incitement to violence. 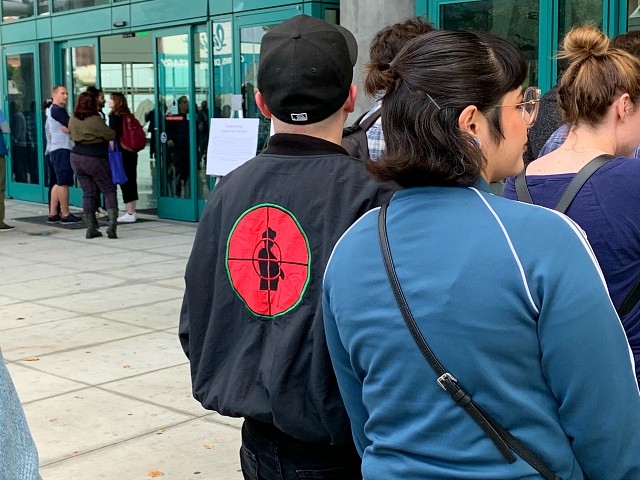 But that is not how Sanders interpreted crosshairs when they were used by Sarah Palin — with no one in the sights.

As the Washington Free Beacon noted, Sanders actually fundraised in 2011 by criticizing Palin for using crosshairs:

“This horrendous act of violence is not some kind of strange aberration for this area where, it appears, threats and acts of violence are part of the political climate,” Sanders wrote in a fundraising email in January 2011. “Nobody can honestly express surprise that such a tragedy finally occurred.”

Giffords was critically wounded by a gunshot wound to the head during an assassination attempt. Twenty people were shot, and six of them were killed.

“Congresswoman Giffords publicly expressed concerns when Sarah Palin, on her website, placed her district in the cross-hairs of a rifle—and identified her by name below the image—as an encouragement to Palin supporters to eliminate her from Congress,” the Vermont senator wrote.

There was never any connection established between Palin’s crosshairs and the gunman in the Tucson, Arizona, mass shooting. The shooter was mentally disturbed.

Joel B. Pollak is Senior Editor-at-Large at Breitbart News and the host of Breitbart News Sunday on Sirius XM Patriot on Sunday evenings from 7 p.m. to 10 p.m. ET (4 p.m. to 7 p.m. PT). He earned an A.B. in Social Studies and Environmental Science and Public Policy from Harvard College, and a J.D. from Harvard Law School. He is a winner of the 2018 Robert Novak Journalism Alumni Fellowship. He is also the co-author of How Trump Won: The Inside Story of a Revolution, which is available from Regnery. Follow him on Twitter at @joelpollak.