Father Neville Fernando, TOR, froze. He was standing in the middle of St. Sebastian’s Church in Negombo, Sri Lanka, on Easter Sunday in the immediate aftermath of a jihadist attack that would kill over 250 people and injure 500 others in three churches and three hotels in the Colombo area.

“I heard the explosions, I saw the bodies, you know — the parts of the bodies, legs and hands and all. I was just trapped in the middle of the church, I could not do anything,” Fernando told Breitbart News in an interview on Tuesday.

Fernando is in the United States for a series of events to bring awareness to the pain of the persecuted Christian church hosted by Aid to the Church in Need. On Saturday, Aid to the Church in Need will host a Night of Witness event to pray, reflect, and listen to the victims of Christian persecution at the Basilica of the National Shrine of the Immaculate Conception in Washington, DC.

Fernando is here to share his experience rebuilding a community blown apart by suicide bombs and the sudden realization that Islamic State radicalization had come knocking on the doors of Sri Lanka’s Muslim community. Sri Lanka is a majority Buddhist nation with significant Muslim, Christian, and Hindu minorities — most of whom, Fernando noted, had accepted the reality of centuries of Christians present in their country.

He said the government, currently in transition after the election of President Gotabaya Rajapaksa last weekend, has not offered a clear explanation for who, exactly, committed the bombings. The Islamic State took credit through the Sri Lankan jihadist group National Thowheed Jama’ath and, after heated accusations flew in the highest levels of government, then-President Maithripala Sirisena fired his defense secretary and chief of police for disregarding an intelligence report from India that warned of an impending attack. The move did little to resolve who planned this attack, however, or prepare for future attempts.

“Our people are asking for justice … which cannot be swept under the carpet,” Fernando said. “We are all in a dilemma … no one can justify violence in the name of God; we all know that God is love, merciful love, in its most radical expression.”

The bombings targeted hotels because many Christians tend to go to their restaurants for a celebratory Easter brunch. In the churches, eyewitnesses said they say the suicide bombers detonated towards the back of the church to have a better chance of killing children as parents of babies tend to stand in the back in case their child cries and they need to make a quick exit. The churches were so crowded that the bombs destroyed many bodies, leaving so many limbs in the wreckage that police initially overestimated the dead by nearly 100 before DNA tests confirmed many of the remains belonged to the same individuals. 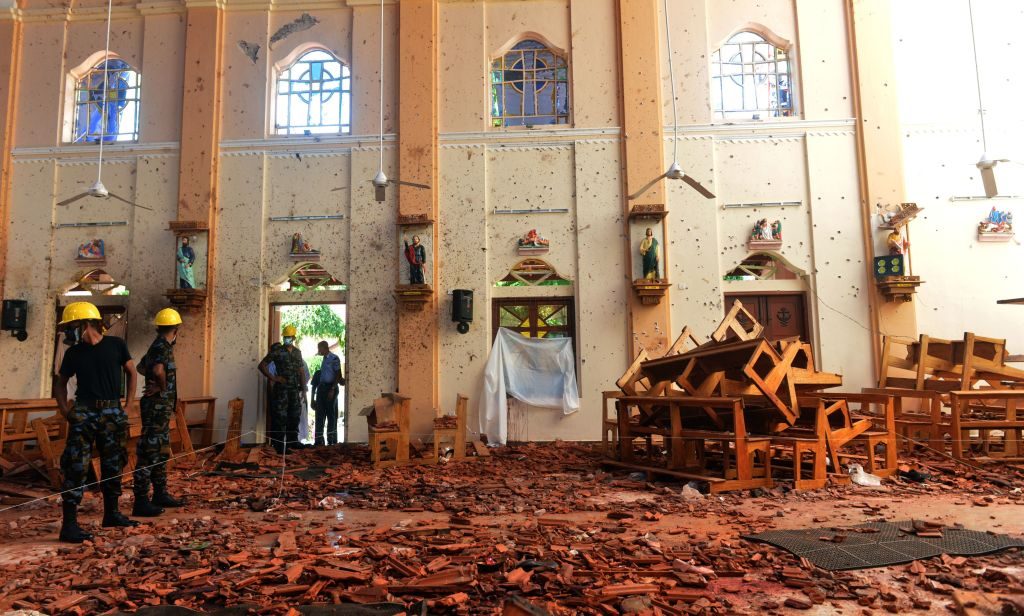 Security personnel inspect the interior of St. Sebastian’s Church in Negombo on April 22, 2019, a day after the church was hit in series of bomb blasts targeting churches and luxury hotels in Sri Lanka. (ISHARA S. KODIKARA/AFP via Getty Images) 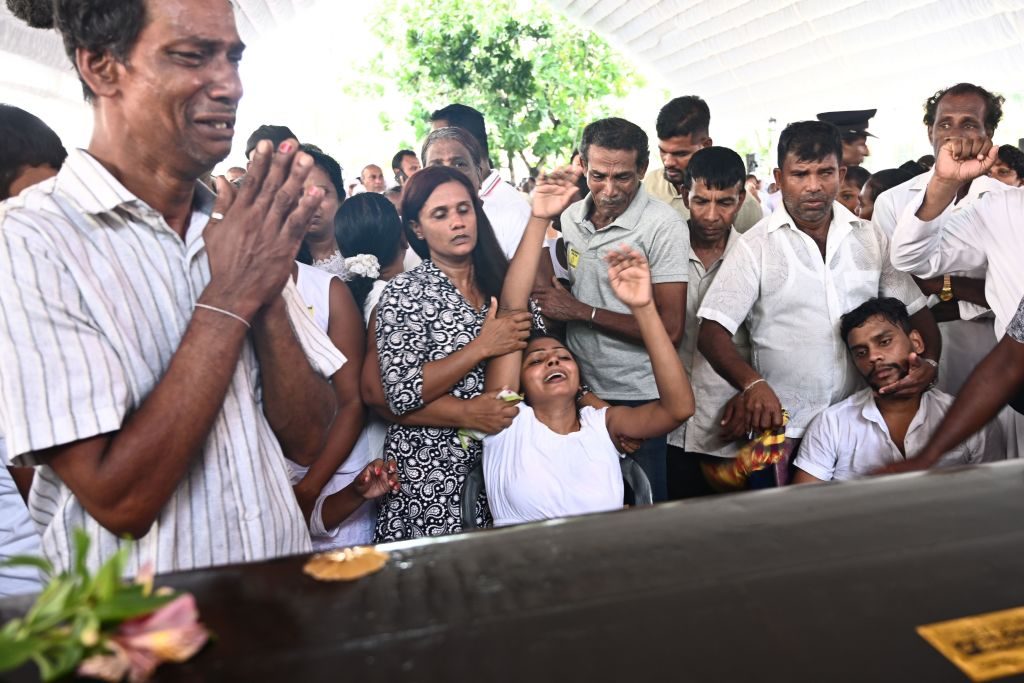 Relatives mourn beside a coffin of a bomb blast victim during a funeral service at St. Sebastian’s Church in Negombo on April 23, 2019, two days after a series of bomb attacks targeting churches and luxury hotels in Sri Lanka. (JEWEL SAMAD/AFP via Getty Images) 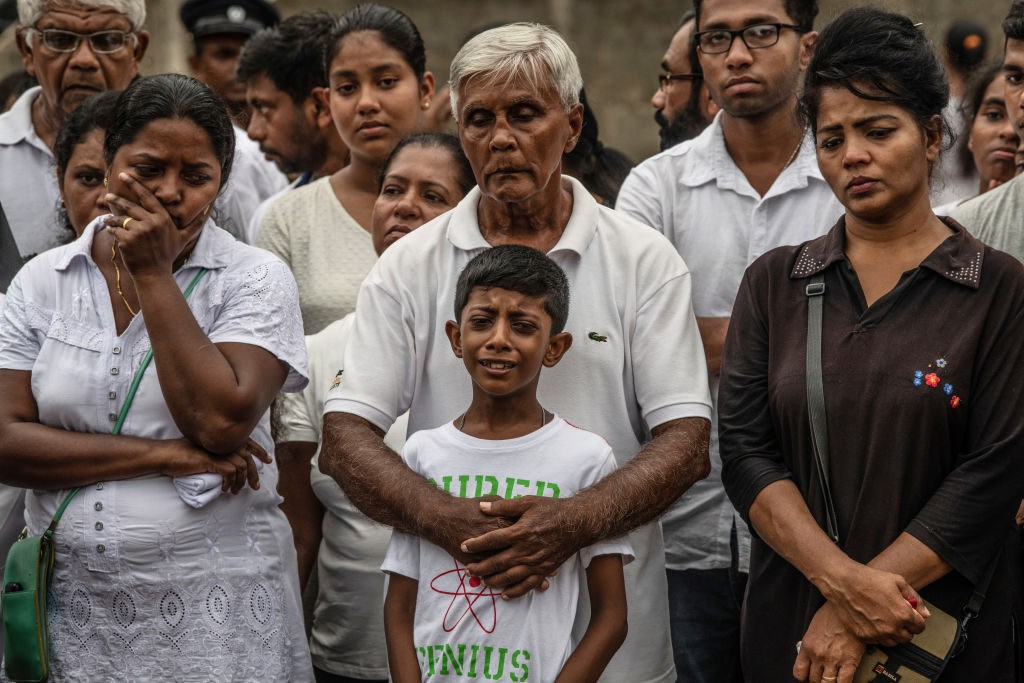 A young boy cries during a funeral for a family member killed in the Easter Sunday attack on St. Sebastian’s Church, on April 25, 2019, in Negombo, Sri Lanka. (Carl Court/Getty Images)

“I was just unconscious at that time. I was telling all others what had happened to me. I did not know — for five minutes I was fainted — but after that, I just came out of the church,” he told Breitbart News. “I called police, emergency services, and I was calling all my friends [to say] what happened — we still didn’t know what it was. It was a very bad attack.”

After finding the living among the rubble, Fernando said he and other clergy began “carrying the sick and wounded, visiting all the hospitals, and taking care of them. And, finally, for a while, we were very busy at that time administering last rites and consoling survivors. It was a very very big tragedy.”

“We were listening and consoling them, whatever we could do at that time … we were with them, we were praying,” he recalled.

Today, much of the work needed in his congregation is emotional and spiritual.

“We pray the rosary together with them and we organize healing services … our prayers for the suffering and pain, counseling for those that are traumatized, more spiritual support [to help] carry on with their lives,” he told Breitbart News.

Fernando said he and the Catholic leadership in the country have endeavored to prevent revenge attacks by insisting that Christianity is “not a faith of vindictiveness.” He noted that many among the Buddhist majority “came, they were consoling us, telling us not to be afraid, that ‘we are with you.'”

Part of the emotional recovery, he told Breitbart News, was the shock of the attack in light of relative peace in the aftermath of the Sri Lankan civil war between Buddhists and Muslims that lasted 25 years and ended in 2009. The president-elect’s brother, Mahinda Rajapaksa, is often credited with ending that war and returned to power on Thursday as prime minister, in part due to frustrations with the previous government’s response to the Easter attacks.

“We didn’t have anything against the Muslim community in Sri Lanka. Catholics and Muslims — we were working together. So that is a problem still, we are searching for that, why did it happen to us?” Fernando said.

His concern for knowing who organized the attacks and insisting that local Muslims who knew the Christian community in Negombo largely had no problems with them, echoes similar confusion and disappointment elsewhere in South Asia, particularly in light of the fall of the Islamic State in Iraq and Syria. The collapse of the “caliphate” headquartered in Syria triggered a flood of battle-hardened jihadis into countries like Sri Lanka, the Philippines, Afghanistan, Pakistan, India, and much of Africa. Some of it is the reversal of a wave of Southeast Asian citizens who joined the “caliphate” between 2014-2016, but many are foreigners fleeing the consequences of their terrorist activities in the Middle East.

This complicates a scenario in which the small but extremely religiously diverse nation was already struggling against people who “don’t like to see our way of living,” Fernando said.

“The problem is not the government leaders but the people who are very much going against [us] because of our way of living … they have leaders, but they are not obeying, even the Muslims,” he said.

Politicians capitalizing on those tensions have not helped, he added.

“Our motto is that [we] should be all, we need all of humanity … we are Sri Lankans,” he insisted. “That is what we need today in Sri Lanka … to learn to appreciate the differences and to accept each other and show mercifulness to each other.”