Bar owners in Hong Kong staged a symbolic hunger strike on Monday to protest the city government’s ongoing coronavirus restrictions, which have forced bars to remain closed while allowing other businesses, such as restaurants, to reopen.

“People are queueing for beaches … restaurants are full, but only we are in pain and barred from opening,” Leung Lap-yan, founding president of Hong Kong’s Licensed Bar and Club Association, told reporters on April 5. Leung gathered with other bar, karaoke, and mahjong (Chinese tile game) parlor owners on April 4 in front of the Hong Kong government headquarters to launch a four-day protest of continued bar closures. Participants will refuse meals in shifts as part of a symbolic hunger strike.

April 4 marked the one-year anniversary of the Hong Kong government’s first mandate ordering bars in the city to close due to the Chinese coronavirus pandemic. Hong Kong bars have been fully closed for 230 days over the past year, “opened with restrictions for 101 days, and allowed to run normally for only 24 days,” Agence France-Presse (AFP) reported on Monday.

“The latest closures have been in place since November, meaning bar owners missed out on the usually peak Christmas, New Year, and Easter holiday seasons.” 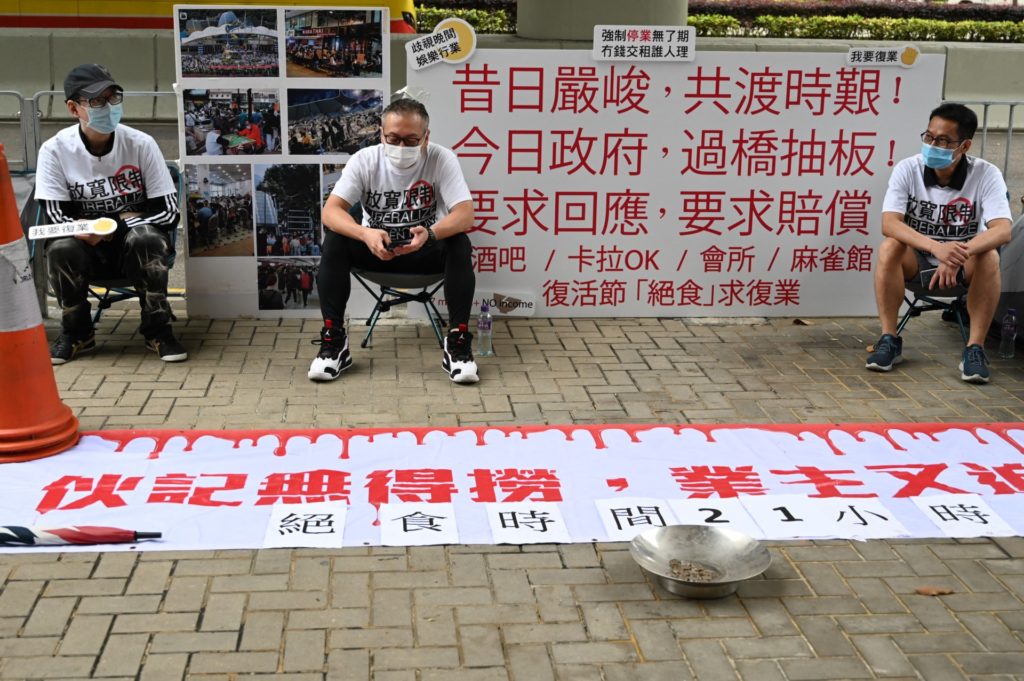 Members of a group representing bar, karaoke and mahjong parlour owners take part in a symbolic four-day hunger strike outside the government’s headquarters in Hong Kong on April 5, 2021, over anti-coronavirus measures which have kept their industries shuttered for most of the last year. ((PETER PARKS/AFP via Getty Images)

The Hong Kong government said last April it had traced the city’s first cluster of coronavirus infections to bars and pubs and promptly issued a municipal mandate ordering the facilities to close.

“Any premises (commonly known as bar or pub) that is exclusively or mainly used for the sale or supply of intoxicating liquors … must be closed [sic],” the government said in a statement on April 2, 2020.

The Hong Kong government has allowed restaurants in the city to reopen in recent weeks if they enforce capacity restrictions, which include seating no more than four people per table. Hong Kong shopping malls and theme parks have also recently reopened with AFP on Monday describing them as “packed.” Gyms, which have been repeatedly blamed by the Hong Kong government for new coronavirus clusters, have also been allowed to resume business.

Despite the sweeping reopenings, bars in Hong Kong remain closed. Bar owners at the hunger strike on Monday said their industry was “willing to adopt stringent measures including capacity restrictions and even requiring customers to drink with a straw.” Despite the bar owners’ concessions, the Hong Kong government has yet to issue any response, nor has it indicated that it will allow pubs to resume business anytime soon.