Taliban leaders have repeatedly used public statements celebrating their takeover of Afghanistan this week to sell themselves as a reformed organization, promising “inclusive” leadership, respect for women, and peace with its neighbors.

The Taliban’s top two spokesmen, Zabihullah Mujahid and Suhail Shaheen, have both consistently used the word “inclusive” to describe the government the group debuted before the world on Sunday, the “Islamic Emirate of Afghanistan.” Both have stated the jihadists would not force women to wear a burqa, the repressive full-body covering the Taliban killed women for rejecting during its first shot at running the country prior to the 2001 U.S. invasion. And both have repeatedly urged educated Afghans not to leave the country, admitting they need doctors, engineers, and economists to ensure their regime will thrive. 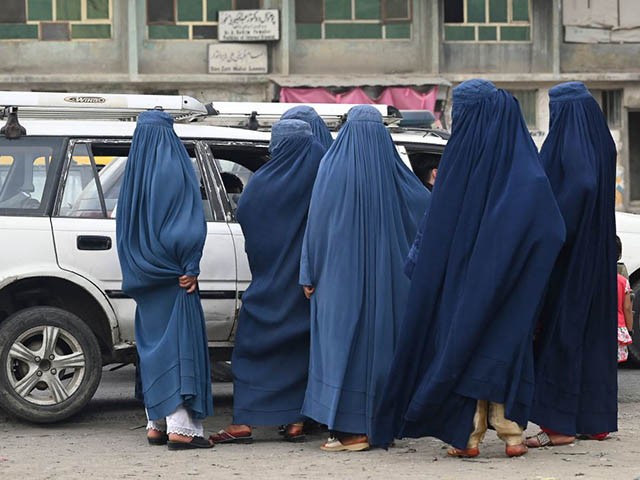 The Taliban’s public relations shift is the most high-profile rebuke of a style of radical Islam that became dominant in the 2010s thanks to the work of the Islamic State: the use of graphic violence, constant threats, and promises of action-star lifestyles for those who join the jihad. Islamic State propaganda regularly recalled the Crusades and threatened to visit upon the Western world mass death and destruction, offering its signature beheading videos as proof they were not bluffing.

The Islamic State project failed, in part, because that style of propaganda almost exclusively attracted uneducated young men with dreams of dying in suicide bombings, not creating a functional ISIS currency. A large percentage — arguably the majority — of recruits used the opportunity to drug themselves into a rage and go on killing and raping sprees. Few had the patience to build an authentic Islamic state.

The Taliban appear determined not to repeat that mistake, and some in the international community seem willing to help them.

Images of Taliban jihadists opening fire into peaceful crowds, beating civilians on the street for alleged infractions against sharia, and attacking people seeking access to the Kabul airport contradict the moderate tone the Taliban has chosen to adopt. Yet indications are growing that some governments and international institutions see the change in language as a favorable enough benefit to give one of the world’s most violent terrorist groups the benefit of the doubt. If Taliban propaganda succeeds, the terrorists have a chance at international recognition as a legitimate government — and with it, potentially billions in foreign investment.

Zabihullah Mujahid appeared keenly aware of this at his press conference on Tuesday, his television debut.

“Our countrymen and women who have been waiting, I would like to assure that after consultations that are going to be completed very soon, we will be witnessing the formation of a strong Islamic and inclusive government, Inshallah,” Mujahid stated. “We will do our most to make sure that everybody is included in the country, even those people against us in the past, so we are going to wait until those announcements are made.”

“We’re continuing our communication with them we will do our most to make sure that all Afghans are included,” he insisted. “Nobody should be left out, or any anybody with interests to serve the nation, they’re not going to be ignored. So the future government will be inclusive.” 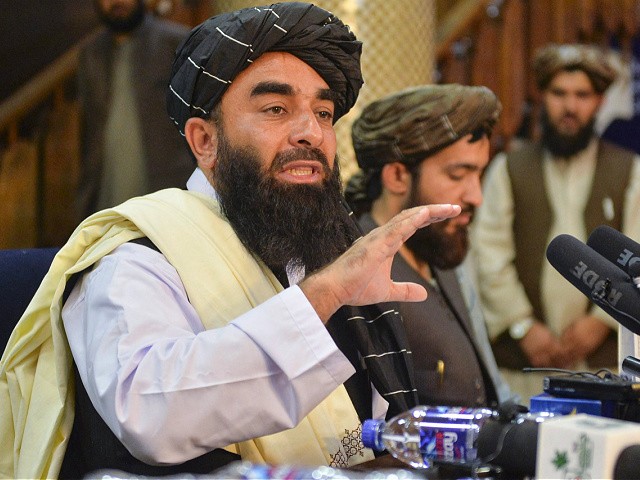 Of women, Mujahid said — responding to a question from a woman reporter — “of course, they will be able to work within the frameworks of our Islamic laws for example in education, in health, in prosecution. Of course, women are needed, they are going to be able be working.”

The spokesman went out of his way to implore educated Afghan citizens, particularly “youth who have talents,” not to flee the country. He vowed a full amnesty to anyone who worked with the U.S. government.

“These are our assets, we would like them to stay here, to serve,” he asserted.

Mujahid’s language is consistent with Shaheen’s, who told the Associated Press in the immediate aftermath of the takeover of Kabul that the Taliban would create an “open, inclusive Islamic government.”

Shaheen has been using the talking point for years.

“We want an inclusive government because that will guarantee a stable government in the country,” Shaheen told reporters in December of that year. “Otherwise we will have fighting.” 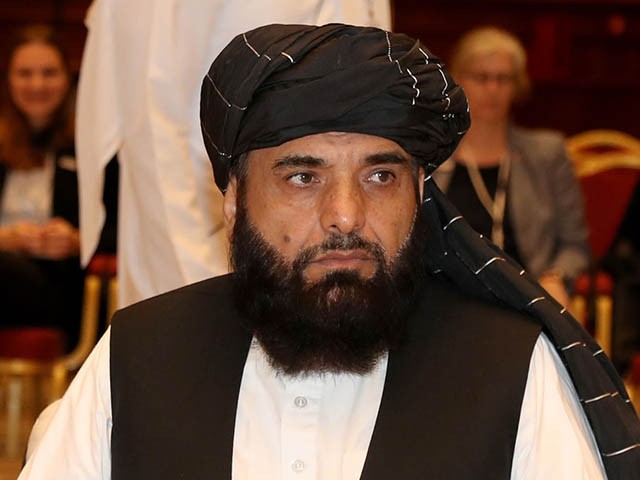 Suhail Shaheen, spokesman for the Taliban in Qatar, attends the Intra Afghan Dialogue talks in the Qatari capital Doha on July 7, 2019. (KARIM JAAFAR/AFP via Getty Images)

Like Mujahid, Shaheen has emphasized the importance of foreign investment and preventing “brain drain,” the phenomenon where a country’s most educated people flee, preventing the country from developing. In this he has not been alone — also in 2019, a different jihadi leader, Mullah Sher Mohammad Abbas Stanikzai, went as far as to invite educated Americans to help a Taliban regime be successful.

“We have told them [the Americans] that after ending your military intervention, we will welcome U.S. engineers, doctors, and others if they want to come back for reconstruction of Afghanistan,” Stanikzai said. “And they have promised to do so.”

As the most successful jihadist terrorist group on the planet today following its takeover of Kabul, the Taliban’s tone is now, by default, the defining voice of the radical Islamist world. And its tone is quite a shift from half a decade ago.

“Muslims have been commanded to terrorize the disbelieving enemies of Allah,” the Islamic State’s officials magazine, Dabiq, asserted in 2019.

“One would think that the average Westerner, by now, would have abandoned the tired claim that the actions of the mujahidin — who have repeatedly stated their goals, intentions, and motivations — don’t make sense,” an article in the same edition of the magazine read. “[The] only thing senseless would be for there to be no violent, fierce retaliation in the first place!” 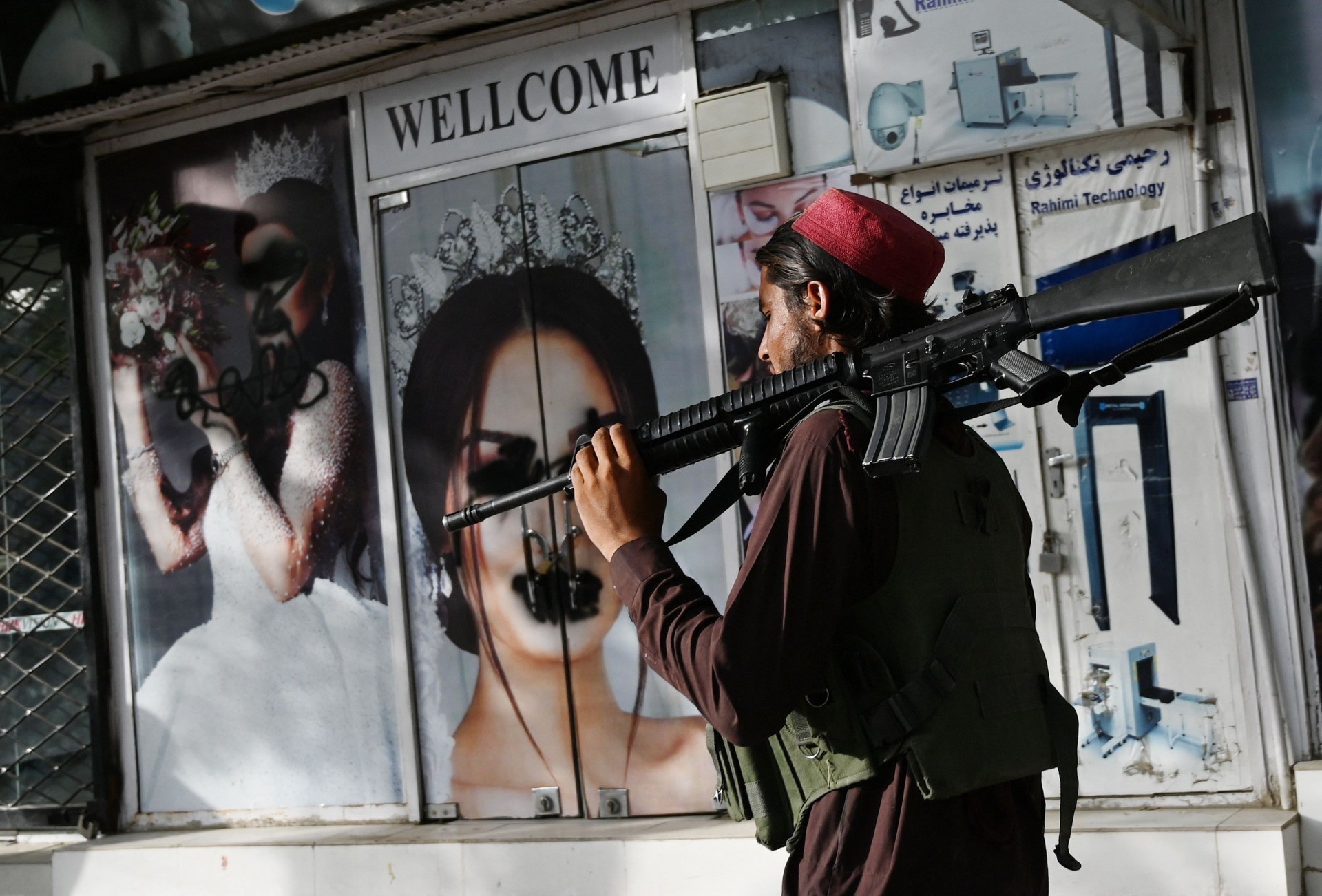 A Taliban fighter walks past a beauty salon with images of women defaced using spray paint in Shar-e-Naw in Kabul on August 18, 2021. (WAKIL KOHSAR/AFP via Getty Images)

Rather than the videos showing apparent calm in Kabul as Taliban leaders patrol the streets, the Islamic State published videos of “infidels” burned alive, beheaded, or otherwise tortured to death. When ISIS propagandists attempted to show their soft side, it typically looked like memes of cats holding automatic weapons or toddlers forced to execute captives.

ISIS failed to deliver on all of its promises because they were contingent on having a pool of competent talent available to its “government.” Power outages and food shortages became a pervasive problem when it became clear no engineers were around to run the electric grid and no one had the skill to manage the supply chain. ISIS lacked a coherent monetary policy or anyone who could make one. Its abundance of young Muslim boys from Europe willing to blow themselves up did nothing to generate tax revenue outside of its lucrative, but unsustainable, trade in stolen priceless antiquities. 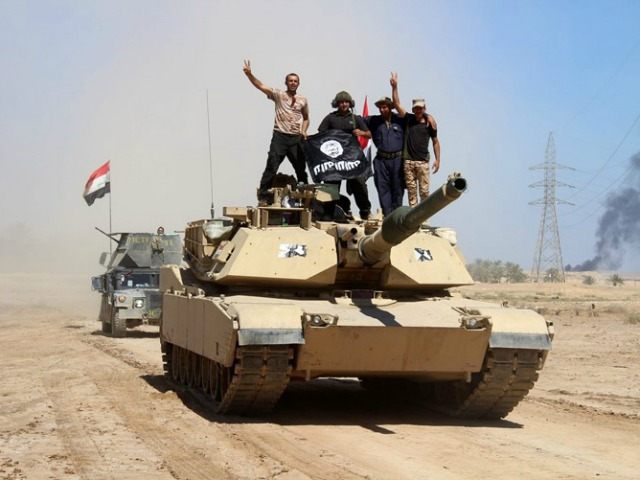 Members of Iraqi government forces celebrate on a tank with a seized Islamic State flag after they retook an area in the village of Mamoura, near Hit, on April 2. (Moadh Al-Dulaimi/AFP/Getty) 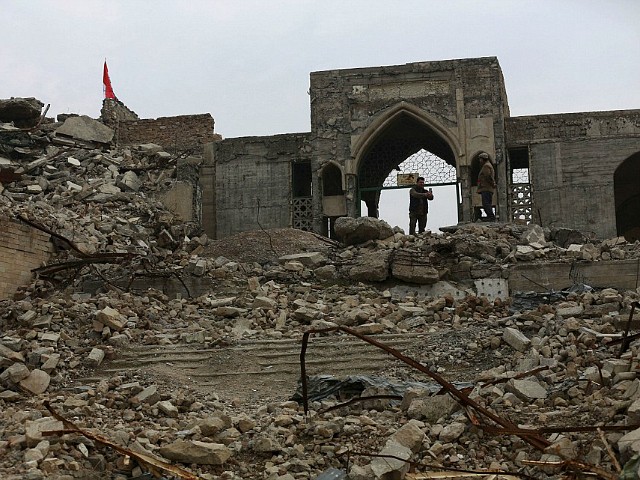 People inspect the destroyed Mosque of The Prophet Younis, or Jonah, in Mosul, Iraq, Saturday, Jan. 21, 2017. The revered Muslim shrine was destroyed on 2014 by Islamic State militants who overran the city and imposed their harsh interpretation of Islamic law. The mosque was built on an archaeological site dating back to 8th century BC, and is said to be the burial place of the prophet, who in stories from both the Bible and Quran is swallowed by a whale. (AP Photo/Khalid Mohammed)

Its initial unwillingness to address the realities of running a state — or at least pay lip service to them publicly — also resulted in ISIS rapidly running out of friends. In contrast, the Taliban already appears to have China and Russia in its pocket, the former armed with its billion-dollar Belt and Road Initiative (BRI), an infrastructure debt trap scheme that could at least help fund Taliban operations for some months.

“China hopes that the Taliban will implement its previous vows to establish through negotiation an open and inclusive Islamic government and act responsibly to ensure the safety of Afghan citizens and foreign missions in Afghanistan,” Chinese Foreign Ministry spokeswoman Hua Chunying said Monday in response to the Taliban’s conquest of Kabul. Hua notably repeated the Taliban’s language verbatim.

Russian officials went as far as to claim the Taliban leaders were more “reasonable” than the Afghan government they had ousted and hope that a Taliban-run Afghanistan would be “civilized, without any terrorism and drugs.”

China’s and Russia’s support made a clear ripple effect at the United Nations. The Security Council, where both are permanent members, issued a statement on Monday urging the Taliban to put together an “inclusive” government, again echoing the jihadists themselves.

“The members of the Security Council called for an immediate cessation of all hostilities and the establishment, through inclusive negotiations, of a new government that is united, inclusive and representative,” the statement read, “including with the full, equal and meaningful participation of women.”

An official with UNICEF, the United Nations’ childrens’ rights agency, outrageously stated he was “optimistic” for the future of women and girls in Afghanistan with the Taliban in power, despite its extensive record of torturing and murdering them.

“We have ongoing discussions, we are quite optimistic based on those discussions,” Mustapha Ben Messaoud, UNICEF chief of Afghanistan operations, said this week, adding that his organization had “not had a single issue with the Taliban.”

The government of the United Kingdom chimed in with its own optimism on Wednesday.

The administration of President Joe Biden was not far behind in opening the door to a world where, after 20 years of war, the United States would recognize the Taliban once again as the government of Afghanistan.

“A future Afghan government that upholds the basic rights of its people and that doesn’t harbor terrorists is a government we can work with and recognize,” Secretary of State Antony Blinken said in an interview with CNN this weekend.