MONTERREY, Nuevo Leon – Mexican federal authorities arrested the former Nuevo Leon State Police head of intelligence for allegedly smuggling more than 24 pounds of crystal meth in his vehicle. Police made the arrest as the former top cop drove to the Mexican border city of Nuevo Laredo.

This week, Mexico’s Attorney General’s Office announced the arrest of 47-year-old Victor Manuel Pecina Breton after discovering 32 bricks containing 12.5 kilograms of methamphetamine in his Volkswagen Beetle. The arrest took place in the town of Sabinas along the highway that connects Monterrey, Nuevo Leon and Nuevo Laredo, Tamaulipas. After the arrest, authorities moved the former top cop to Monterrey where they formally charged him with drug trafficking. 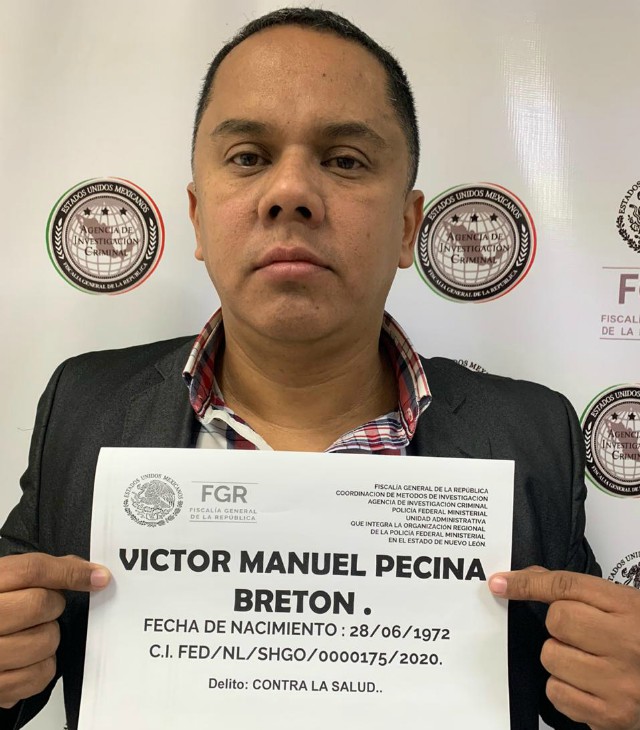 Breitbart Texas confirmed that Pecina Breton had been a long-time member of the state police force in Nuevo Leon known as Fuerza Civil. He most recently served as head of the agency’s intelligence division until his 2011 arrest after a series of investigations tied him to a group of corrupt cops who had been carrying out ransom kidnappings while working as cops.

In one of the older cases that Pecina Breton and his officers Jorge Enrique Baca Dajlala and Hugo Luis Gómez Zamudio kidnapped Jose Antonio “Tigre Tono” Herrera Flores and his partner during a fuel theft operation gone wrong. The officers pretended to arrest Herrera only to negotiate a ransom for his release at the police headquarters. Another Fuerza Civil officer who claimed to work for Pecina Breton was Luis Irving Saldana Lara who went to prison in 2012 after being linked to a network of lookouts who had been providing information to the Gulf Cartel in Nuevo Leon.

Pecina Breton’s new arrest continues to paint a cloud of corruption over Nuevo Leon’s Fuerza Civil. As Breitbart Texas reported this week, authorities arrested two officers from that agency for kidnapping and trying to extort a small business owner in Monterrey. Neighbors rushed to help the store owner and began beating the officers who were out of uniform. In recent years, Fuerza Civil faced several cases of corruption including extortion, throwing a drug dealer off a building, and protecting certain cartels.