The number of Americans dying by drug-overdose has reached a record high since 2009, while tens of thousands of convicted drug-traffickers are getting early releases from federal prisons.

In 2014 alone, a total of 47,055 deaths – a rate of over 120 deaths per day – were recorded, according to data from a federal agency, the Centers for Disease Control and Prevention (CDC).

At the same time, President Barack Obama’s prosecutions of drug traffickers have declined by 21 percent since 2011, and when they are prosecuted, their sentences are more lenient. 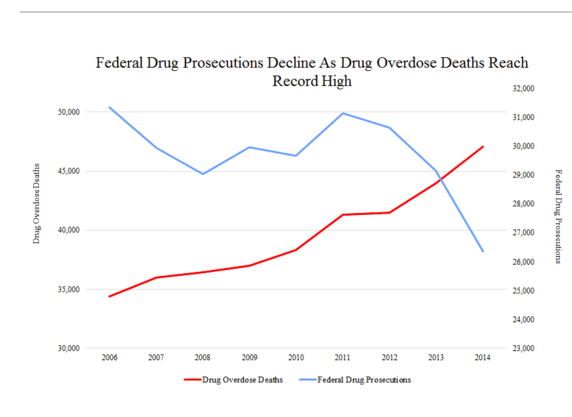 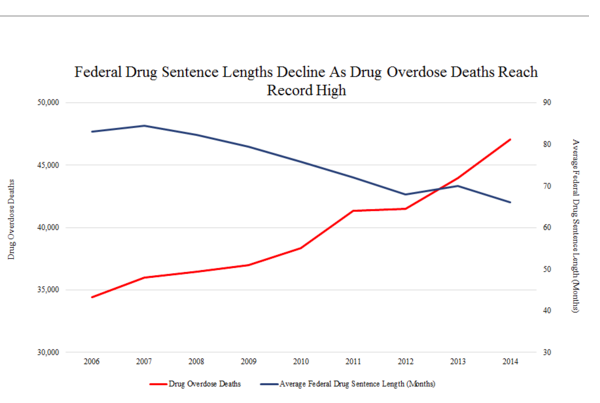 “The sharpest decline in prosecutions and in average sentences for convicted federal drug felons has occurred since 2013, when then-Attorney General Eric Holder ordered Federal prosecutors not to charge certain drug felons with offenses that carry mandatory minimum sentences,” according to Sessions’ news release. “This was a clear statement of administration policy to prosecutors – ease up on drug prosecutions.”

Supporters of early release programs often attempt to ease the fears of the public by suggesting the prisoners have committed low-level, non-violent crimes.

Those serving sentences in federal prison for federal drug crimes are not low-level, non-violent drug possessors: according to the Bureau of Justice Statistics, 99.7 percent of federal drug felons were convicted of drug trafficking, not simple drug possession. As the DEA’s 2015 National Drug Threat Assessment notes, “[t]hough gangs are involved in a multitude of criminal activities, street-level drug trafficking and distribution continues to be their main source of revenue, and they commit violent crimes, such as robbery, assault, threats, and intimidation, in furtherance of those ends.”

Despite the urging last December of CDC director Tom Frieden that “law enforcement intensify efforts to reduce the availability of heroin, illegal fentanyl, and other illegal opioids,” the Obama administration and some members of Congress continue to support early release programs and fewer prosecutions of criminal groups that facilitate drug addiction.

“The sharp increase in deaths involving synthetic opioids, other than methadone, in 2014 coincided with law enforcement reports of increased availability of illicitly manufactured fentanyl, a synthetic opioid,” CDC stated as well. “These findings indicate that the opioid overdose epidemic is worsening.”