Left-wing Hollywood actor Mark Ruffalo got political in his Easter Sunday greeting, urging his fans to recall how Jesus Christ was an “illegal immigrant” — a flawed talking point frequently deployed to harpoon the moral argument for stricter immigration policies.

“Happy Easter! Never forget…Jesus was an “illegal immigrant,” Ruffalo tweeted to his nearly 5 million Twitter followers with a link from the Guardian about Jesus entitled, “The politics of Easter is powerful. Let’s not forget it.”

“While Trumpvangelicals want to use religion to whitewash this violence against our immigrant neighbors, the Easter story offers a clear rebuke. Jesus was crucified as an illegal and rose from the dead to demonstrate that God’s reign is greater than any political system’s efforts to pit us against one another,” the opinion-editorial by Reverend William Barber reads. “The Acts of the Apostles tell us that followers of the resurrected Christ were first called “Christian” at Antioch because there was no other name for the beloved community of former enemies that emerged among people who insisted that a crucified criminal, not Caesar, is Lord. A truly revolutionary vision was unleashed in the world that first Easter.”

However, not all evangelicals share this reading of the gospel of Matthew. “Egypt was a part of the Roman empire,” argues the Christian blog Pulpit & Pen. “This was essentially like Jesus fleeing from Ohio to Indiana. No sovereign boundaries were crossed, and they certainly weren’t crossed illegally.”

Ruffalo, whose progressive activism is focused primarily on environmental issues, has previously voiced support for illegal aliens and criticized the Trump administration’s immigration policies. In January 2018, Ruffalo declared the U.S. is a “nation of illegal immigrants” and claimed the millions of “DREAMers” living in the country are “the fruit of America.”

“As things get ugly and rhetorical let’s not forget that we are a country of illegal immigrants. The only “real” Americans are the indigenous people of America,” the Avengers star wrote in a Facebook post. 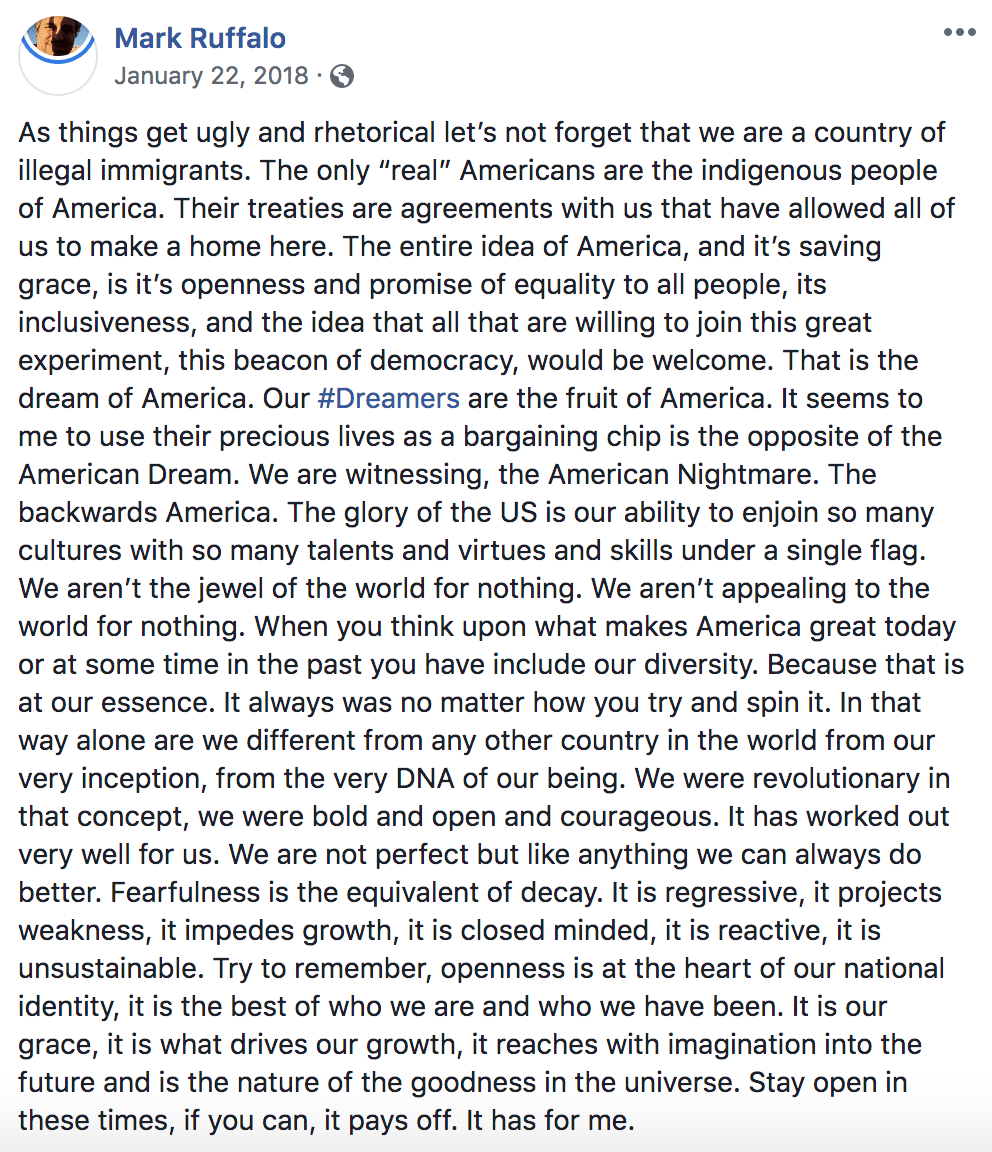 “Our #Dreamers are the fruit of America. It seems to me to use their precious lives as a bargaining chip is the opposite of the American Dream. We are witnessing, the American Nightmare. The backwards America,” he wrote, prompted by a decision by Senate Democrats to vote down legislation which would fund the partialy-shutdown government.

“We respectfully urge you to listen to members of senior party leadership, who have insisted that there must be no final spending bill that does not ensure that the Dreamers have a secure future here in the United States,” the letter read, co-signed by Meryl Streep, Don Cheadle, and Chris Evans.