Charlotte Church has spoken out about her new-found interest in politics, describing a sudden desire to become a social justice warrior.  The Welsh singer also wants to undermine the Conservative government using dancing, fun “and a little bit of hedonism”.

Speaking in an interview with women’s interests e-zine The Pool, Church described how she had enjoyed a sudden political revelation the morning after polling day, when she found herself “devastated” by waking up to a Conservative majority. She said:

“Just recently in my life, my life has taken quite an odd, sharp turn. I sort of said some stuff, like I should be more socially conscientious, and active and stuff in the community, and now I sort of have to do it.

“The day after the election, I just felt absolutely devastated, and there was this whole movement on social media where there were so many people who were absolutely devastated and really shocked. People were saying we can do something, and we’ve got to get involved in local grass-roots community organisation, you know, whether it’s helping out at a food bank, or getting involved in local arts and culture projects, you know, all that sort of stuff”. 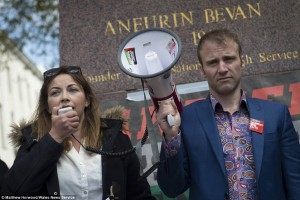 Church described how she was inspired by the postings of other activists online, and how she found their postings “beautiful”, as well as her somewhat slap-dash approach to banner making:

“I went to the march, and it was so much fun. It was great, just going there and you’re chanting… I’ve never made a protest poster before, I was running around the house, I was really late for this protest, and I was like ‘I need a banner’!”

“So I found some cardboard, and I had some of the kids paint, so I did it on there with this paint, and I unscrewed my broomstick handle and selotaped it on. And it worked! It stayed on. When I got down there, there was a couple of television crews and they said ‘can we talk to you’ and I said ‘yeah’, and so I did, and it was a thing.”

On her future plans for activism, Church was forthright, remarking playing the figurehead was not enough: “… and I was a bit like I don’t want to be the poster girl for this, I want to be part of the whole thing”. The multi-millionaire singer said she wanted to use her musical talents to change the world, and use fun to force political change, what some might call a refreshingly different approach to the harsh realities of political life.

She said she wants to start her own party – but not necessarily the kind you’d expect in politics. On creating a ‘party party’ with her music:

“I want to start a band and make super-fun music, especially in these times where there are so many problems nationally, and globally, and so many problems with miscommunication and fear and all this sort of stuff… I think one of the most powerful ways of getting people together is through music and dancing and fun, and a little bit of hedonism if you’re into that.”

Breitbart London reported on Church’s unexpected appearance at the Cardiff march on the 8th of May, and the somewhat self-contradictory remarks she has made when foraying into politics in the past. At various times in her past she has protested publicly at the prospect of paying more than 40 per cent tax on her income, and at others she has volunteered to pay 70 per cent.

Remarkably she has since gone back on her 70 per cent figure again, lamenting even if she did pay it voluntarily it would be a futile act, as British public services are so expensive to run the money would “not last long”, and other high-net worth individuals in the UK would be unlikely to follow suit.