COPENHAGEN, Denmark (AP) — An Iranian-born designer made more than a fashion statement in Denmark on Wednesday by showcasing models wearing the conservative Muslim niqab, and others dressed as police officers, days after a law banning the full-face coverings worn by a tiny number of women in Denmark took effect in the country.

Denmark’s much-debated “Burqa Ban” is mostly seen as being directed at the conservative Muslim dress known as burqas, which conceal the entire face, and niqabs, which only show the eyes, in public places since Aug. 1. Both are extremely rare in Denmark.

“I have a duty to support all women’s freedom of speech and freedom of thought,” Reza Etamadi said of his MUF10 streetwear brand’s Copenhagen Fashion Week show in a statement.

The government says the law is not aimed at any religion and does not ban headscarves like the more-common Muslim hijab, turbans or the traditional Jewish skull cap.

The Danish law allows people to cover their face when there is a “recognizable purpose” like cold weather or complying with other legal requirements, such as using motorcycle helmets. Anyone forcing a person to wear garments covering the face by using force or threats can be fined or face up to two years in prison. 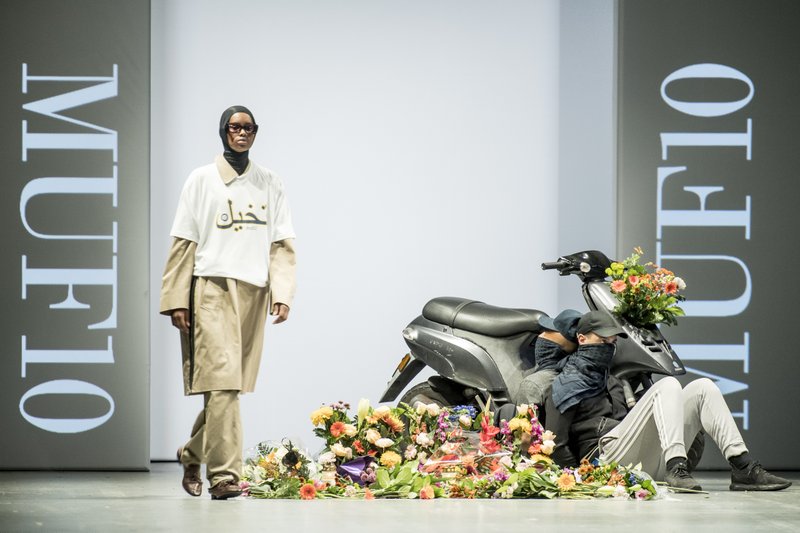 By enforcing the ban, authorities are violating women’s rights and “the free choice we in the Western world are known for and proud to have,” he said in connection with the semiannual fashion industry event.

“In Iran where I was born, women fight to freely choose what to wear,” Etamadi said, adding “In Denmark, where I grew up, (…) women were free to choose how dressed or covered they wanted to dress.”

“I have no unanimous attitude toward the ban in general but I have a principle: No man should decide what women should wear,” Etamadi said the statement.

On Sunday, a woman wearing a face veil became the first person in Denmark to be penalized for violating the new law, and was fined 1,000 Danish kroner ($156). Police asked her either to remove the veil or leave the premises. She opted to leave.