One of the more dispiriting revelations of recent days has been the terrifying degree to which our great cities — from Seattle to Toronto, from Minneapolis to Bristol — are now utterly in thrall to the radical left.

Yes, of course, this has been years in the making and we’ve all seen the warning signs.  But it’s shocking and dispiriting all the same to see, for example, a metropolis as mighty as London brought low by the machinations and dirty politics of the crappy, two-bit, Islamist Social Justice Warrior currently acting as its Mayor.

As if his record on everything from censorship to knife crime wasn’t bad enough, Mayor Sadiq Khan has embarrassed London further by allowing a statue of Britain’s greatest hero Winston Churchill to be vandalised right in front of the Houses of Parliament by a bitter, hard-left, race-baiting mob.

Now, to add insult to injury, he has had the statue boarded up for reasons which smack of both cowardice and cynicism. 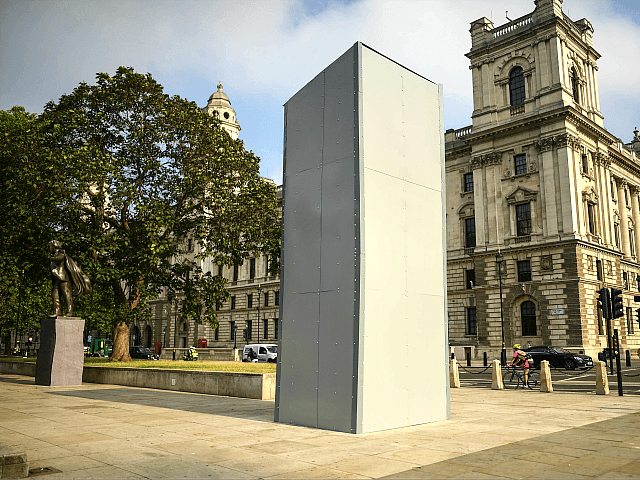 The cowardice (which also includes a good measure of Khan’s trademark incompetence) is the way it capitulates to the mob. It sends out a signal that the Metropolitan Police — who come largely under the Mayor of London’s control — are now incapable of keeping order and protecting property even in the most heavily guarded, security-conscious zone of the entire city.

The cynicism lies in the timing. Khan is boarding up the statue in part, I would argue, in order to smear his political opponents.

This Saturday various groups will be arriving in London in a show of defiance against the recent, violent Black Lives Matter/Antifa rallies where police officers (and at least one police horse) were viciously assaulted and where public property was damaged.

These groups range from the mostly white working-class Democratic Football Lads Alliance (invariably and for the most part unfairly described in the mainstream media as “far-right thugs”) to sundry military veterans properly incensed at watching their capital’s streets mobbed, its war memorials vandalised, their national heroes mocked, and their history trashed by a bunch of hard-left bully boys.

Khan wants to promote the narrative that the real threat to Britain’s security comes — against all evidence — not from the far left but from the “far right”. Hence his series of provocative tweets like this one below:

The extreme far-right want to hijack the Black Lives Matter protests and distract from this crucial cause.

We must not give them the oxygen they crave, or lose this chance of fundamental and far-reaching change. @MetroUK #BlackLivesMatter https://t.co/yRfWkMsRY2

This is pure leftist propaganda. And arguably inflammatory propaganda at that. It assumes, quite inaccurately, that Black Lives Matter is an innocuous, worthy, and indeed “crucial” campaign which every right-thinking person in London and beyond supports.

It’s untrue, it’s unfair and it’s potentially very dangerous, for it threatens to pour petrol on the flames of the current tensions in London and beyond.

Most people in Britain are properly appalled that leftist mobs are being allowed to run rampant in cities, often unchecked by woke senior police officers who, instead of keeping order without fear or favour, instead often seem sympathetic to the vandalism being done to statues and memorials because it elides with their politically correct world view.

You can understand the frustration of genuine heroes like ex-solider Trevor Coult who risked his life — and won a Military Cross — fighting for Queen and Country:

Getting tired of being labelled a “Racist”.
I served my Country with distinction, I fought our enemies with success, I will now protect our war memorials.
If that makes me a racist, then yes I am!! pic.twitter.com/loJee1QQP7