Members of the band Hatari, who sang a techno-punk song with S&M themes, held up Palestinian banners to the cameras, violating Eurovision rules to abstain from politics.

However, the move was dismissed by the very people it was hoping to support. The Palestinian Campaign for the Academic and Cultural Boycott of Israel said, “Palestinian civil society overwhelmingly rejects fig-leaf gestures of solidarity from international artists crossing our peaceful picket line.”

“Artists who insist on crossing the Palestinian boycott picket line, playing in Tel Aviv in defiance of our calls, cannot offset the harm they do to our human rights struggle by ‘balancing’ their complicit act with some project with Palestinians. Palestinian civil society overwhelmingly rejects this fig-leafing,” the group said. “The most meaningful expression of solidarity is to cancel performances in apartheid Israel.”

Hatari had originally said they thought the idea of performing in Israel was absurd. After it became clear they would still take part in the competition, they vowed to use the Eurovision stage to make a statement against “Israel’s occupation” as well as bring down global capitalism. Apart from the Palestinian banner, however, the group didn’t make any other gestures of protest.

The European Broadcasting Union, which organizes the contest, said the political display “directly contradicts the contest rules” and may have consequences.

“The banners were quickly removed and the consequences of this action will be discussed by the Reference Group (the Contest’s executive board) after the Contest.”

A public petition that was launched in the U.S. called for Iceland to be disqualified in future years and as of Monday morning had received nearly 23,000 signatures.

While many people on social media expressed anger that Iceland’s entry violated contest rules and politicized the music event, others mocked the group – in particular, poking fun at their bizarre getup.

“When laying tefillin doesn’t help,” said another, referring to the band member with leather straps bound around his arm, reminiscent of the Jewish ritual of phylacteries.

Another picture making the rounds featured the Palestinian banners photoshopped to display Israeli flags emblazoned with the phrase “Am Yisrael Chai” (the nation of Israel lives.) 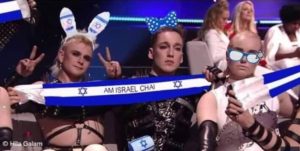 “To top it off, they held up ‘Palestinian banners’ as the votes were coming in. Disgraceful!”

After the final, a Hatari band member posted a video in which he is dressed in a leather mask with red metal spikes while a member of security asks for the Palestinian flags.