(AP) —  Lebanese security forces fired tear gas to disperse hundreds of protesters in Beirut early Friday after they tried to push through security barriers around the government headquarters amid some of the largest demonstrations the country has seen in years.

The protests erupted over the government’s plan to impose new taxes during a severe economic crisis, with people taking their anger out on politicians they accuse of corruption and decades of mismanagement.

The protests started with a few dozen people gathering in central Beirut over the imposition of a 20-cent daily fee on messaging applications, including WhatsApp.

They quickly escalated into some of the biggest demonstrations since an uprising over a garbage crisis in 2015, with thousands of people taking part. 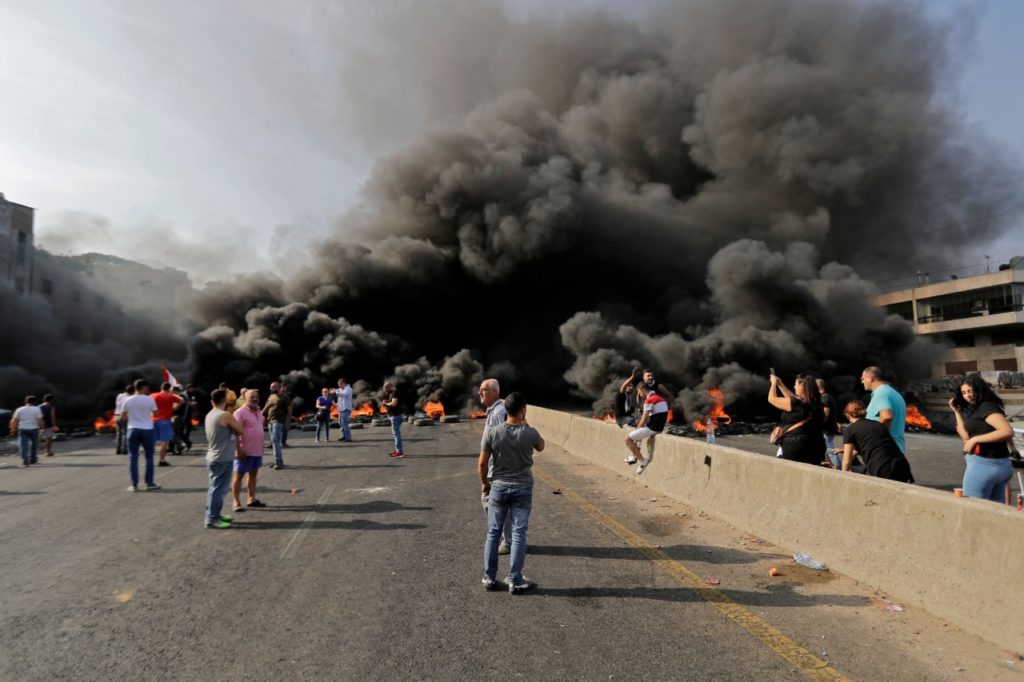 People gathered near the government headquarters and parliament building where riot police were deployed, chanting: “Revolution!” and “Thieves!” — the latter a reference to widespread corruption in a country that has one of the highest debt loads in the world.

Some protesters threw stones, shoes and water bottles at security forces and scuffled with police. Security forces said at least 40 of its members were injured in the clashes. Protesters were also injured.

Police showed restraint as they were pelted with stones for several hours, firing volleys of tear gas only after protesters broke through the first security barrier near the government house. Police chased protesters through the streets of Beirut’s commercial district through the night.

The protests could plunge Lebanon into a political crisis with unpredictable repercussions for the economy which has been in steady decline. Some of the protesters said they would stay in the streets until the government resigns.

“The government is trying to help Lebanese citizens avoid a collapse,” Interior Minister Raya al-Hassan, who ruled out the possibility of a Cabinet resignation, told the Lebanon-based Al-Mayadeen TV. “If another government is formed it will take the same measures.”

Protesters closed major intersections with burning tires and garbage containers, causing traffic jams. As the protests escalated, the minister of education declared that public and private schools and universities would close Friday.

Years of regional turmoil — worsened by an influx of 1.5 million Syrian refugees since 2011 — are catching up with the small Arab country. Lebanon has the third-highest debt level in the world, currently standing at about $86 billion, or 150% of its gross domestic product. 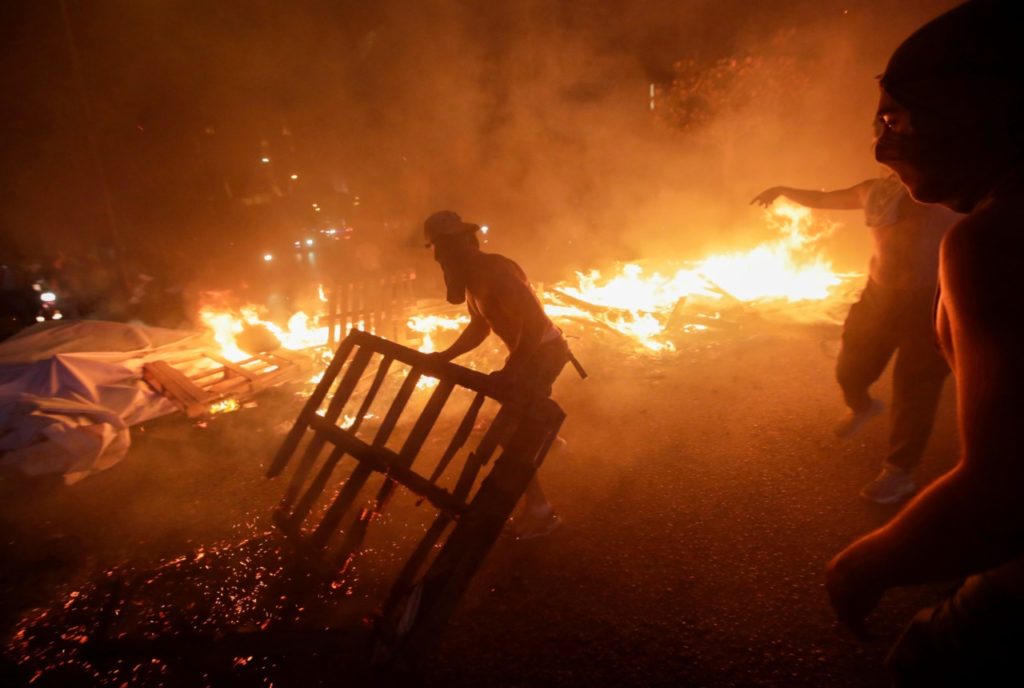 Lebanese demonstrators burn wood and debris during a protest against recent tax calls on October 17, 2019 in the capital Beirut. – Hundreds took to the streets across Lebanon Thursday to protest dire economic conditions after a government decision to tax calls made on messaging applications sparked widespread outrage. (ANWAR AMRO/AFP via Getty Images)

“We refuse what’s happening in Lebanon… The failure of our government to do at least the minimum … has given us no other choice than to take the streets,” said writer and director Lucien Bourjeily.

“They are putting more and more taxes on us even though we can’t take any more taxes,” he said.
When the motorcade of Education Minister Akram Chehayeb padded through downtown Beirut, protesters punched and kicked the cars. One bodyguard jumped out of an SUV and fired an automatic rifle into the air.

Chehayeb rushed out of his car and pushed the guard away and prevented him from shooting again. No one was hurt in the incident.

Protesters also closed roads in other parts of Lebanon, including the northern city of Tripoli, Tyre in the south and Baalbek in the northeast.

The government is discussing the 2020 budget, and new taxes have been proposed, including on tobacco, gasoline and some social media telecommunication software such as WhatsApp.

Telecommunications Minister Mohamed Choucair appeared on TV after the protests began and said Prime Minister Saad Hariri has asked him to drop the proposed tax on WhatsApp. 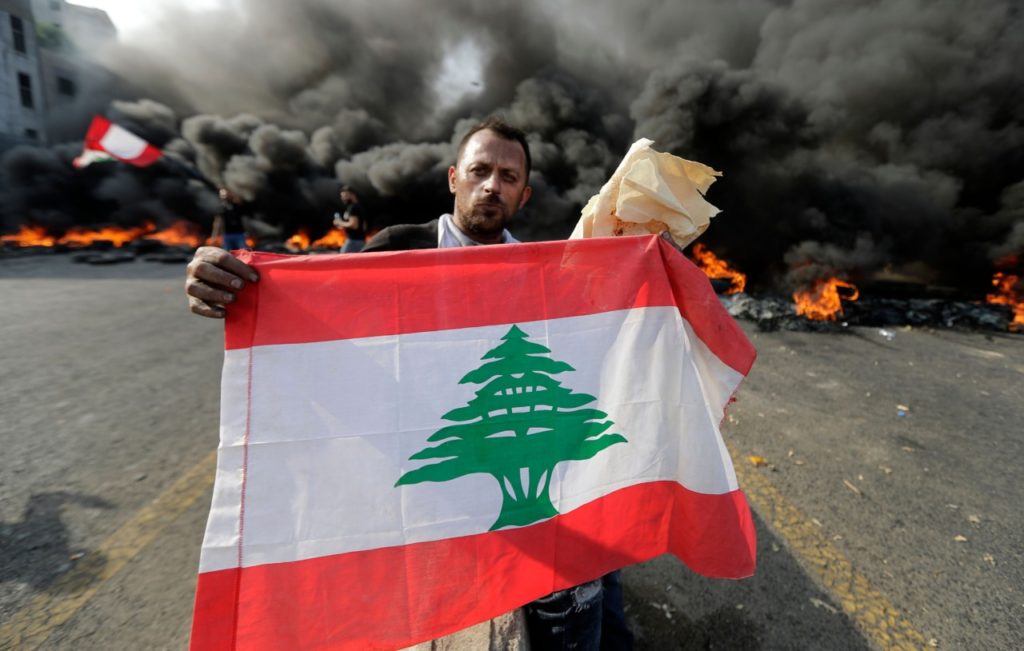 Lebanese demonstrators burn tires and wave their national flag during a protest against dire economic conditions, on October 18, 2019 on a highway between the capital Beirut and the northern city of Tripoli.  (JOSEPH EID/AFP via Getty Images)

As protests continued, demonstrators clashed briefly with riot police outside the government headquarters, an Ottoman-era compound known as the Grand Serial.
“We have no jobs, we have money and we have no future,” one protester screamed.

International donors have been demanding that Lebanon implement economic changes in order to get loans and grants pledged at the CEDRE economic conference in Paris in April 2018. International donors pledged $11 billion for Lebanon but they sought to ensure the money is well spent in the corruption-plagued country.

Despite tens of billions of dollars spent since the 15-year civil war ended in 1990, Lebanon still has crumbling infrastructure including daily electricity cuts, trash piles in the streets and often sporadic, limited water supplies from the state-owned water company.

There are concerns over the country’s financial stability as well. Earlier this month, the local currency reached 1,650 Lebanese pounds to the dollar at exchange shops after it had been stable at 1,500 since 1997.