U.S. Secretary of State Mike Pompeo met with Prime Minister Benjamin Netanyahu on Friday, in a move designed to ease concerns in Israel that Tehran could move to exploit the political vacuum left after the U.S. withdrew forces from Syria.

Pompeo and Netanyahu met in Jerusalem hours after Turkey agreed with the United States to pause its offensive on Kurdish forces in Syria, Reuters reports.

U.S. Secretary of State @SecPompeo and @USAmbIsrael Friedman arrive to the Israeli Prime Minister’s Residence in Jerusalem, for a meeting with Israeli Prime Minister Benjamin @netanyahu. At the end of the meeting, the two officials delivered brief statements to the press. pic.twitter.com/T3Wus7eUA8

Pompeo said he and Netanyahu discussed, “all the efforts we’ve made to push back against the threat not only to Israel but to the region and the world from the Islamic Republic of Iran.”

“We shared our ideas about how we can ensure Middle East stability together, and how we would further our efforts to jointly combat all the challenges that the world confronts here in the Middle East,” Pompeo told reporters with Netanyahu by his side.

Asked for his reaction to the pause in Turkey’s offensive, Netanyahu said: “We hope things will turn out for the best.”

Video: Prime Minister and Defense Minister Benjamin Netanyahu met this morning, at the Prime Minister’s Residence in Jerusalem, with US Secretary of State Mike Pompeo.

Pence announced the breakthrough after meeting for more than five hours in Turkey with President Recep Tayyip Erdoğan and Turkish authorities, as Breitbart News reported. 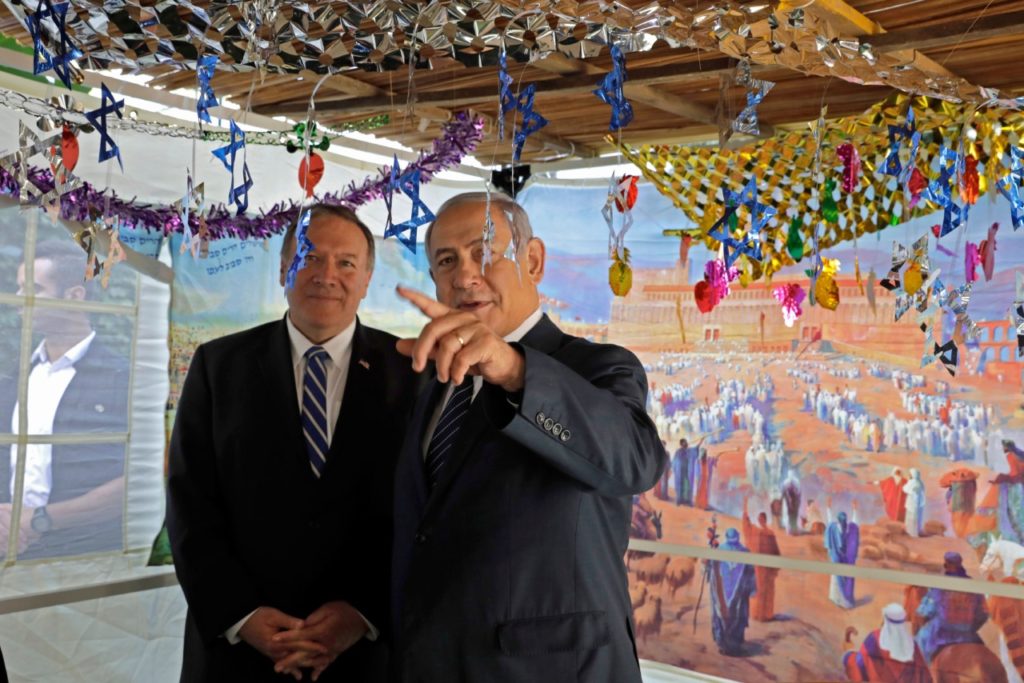 Israeli Prime Minister Benjamin Netanyahu (R) welcomes US Secretary of State Mike Pompeo to a Sukkah, a temporary hut constructed to be used during the week-long Jewish festival of Sukkot, in Jerusalem on October 18, 2019. (SEBASTIAN SCHEINER/POOL/AFP via Getty Images)

He also confirmed Turkey would pause its military invasion to allow the withdrawal of YPG forces from the safe zone that includes a 20-mile-wide area south of the Turkish border in Syria.

Once the withdrawal of the YPG forces was concluded, Pence said, Turkey would agree to a permanent ceasefire.

Meanwhile Pompeo will fly to Brussels for a meeting with NATO Secretary General Jens Stoltenberg late on Friday afternoon.