BEIRUT (AP) — Lebanese security forces fired tear gas, rubber bullets and water cannons Sunday to disperse hundreds of protesters for a second straight day, ending what started as a peaceful rally in defiance of the toughest crackdown on anti-government demonstrations in two months.

The violence comes on the eve of a meeting between the president and parliamentary blocs in which resigned Prime Minister Saad Hariri is widely expected to be renamed to the post. The tension also reflects deepening divisions in the country that is grappling with a severe liquidity and foreign currency crunch.

Hariri resigned Oct. 29 amid nationwide protests that have accused the entire political elite of corruption and mismanagement amid Lebanon’s worst economic crisis in decades. The protesters say they won’t accept Hariri as prime minister, demanding an independent head of government not affiliated with existing parties.

After weeks of bickering, the political parties failed to put forward independent names, most of them insisting on keeping their political share in the government.

The protests Sunday were largely peaceful, but some demonstrators lobbed water bottles and firecrackers at security forces guarding parliament. After a couple of hours, security forces chased the the protesters away, using batons and tear gas. The protesters dispersed in central Beirut. At one point, someone set fire to two tents set up by protesters in Martyrs’ Square, the epicenter for the anti-government protests for 60 days.

After hours of clashes, the army deployed around central Beirut, putting an end to the pitched street battles. The Lebanese Civil Defense said it transferred 20 injured to hospitals while it treated over 70 protesters on site. A news photographer was among the injured.

The army first deployed to separate protesters and rival supporters of political groups, according to reports on al-Jadeed. The local TV station filmed soldiers forcing protesters to retreat from central Beirut’s squares.

Tension has surfaced between protesters and supporters of the Shiite groups Hezbollah and Amal, after the later rejected criticism of their leaders. Meanwhile, the protesters were angered by what they said was the security forces’ harsh crackdown on their rallies while treading lightly when dealing with supporters of the powerful political groups.

Divisions also surfaced among the protesters who rallied in central Beirut. Some promoted confrontation with security forces to express anger at the crackdown and the government’s “business as usual” approach. Many protesters came prepared with helmets and tear gas, and they used plant pots and bins to throw up a barricade in the street.

“We have reclaim our country from this occupation,” one angry protester told LBC TV, referring to what he called a corrupt government in place for decades. Another told Al-Jadeed that on Sunday the protesters started the friction “as a reaction to unjust crackdown” the day before.

Security forces chased protesters in central Beirut, firing tear gas and rubber bullets. Some protesters hid in the commercial area surrounding the parliament and others in masks pelted officers with stones.

Demonstrators had chanted against the security crackdown. One raised a poster saying the tear gas won’t keep them away. “We are crying already,” it added, in a jab at the deep economic crisis Lebanese are facing.

The streets leading to parliament were filled with men, women and even children. Some huddled in smaller groups while others were lifted on shoulders chanting in megaphones. 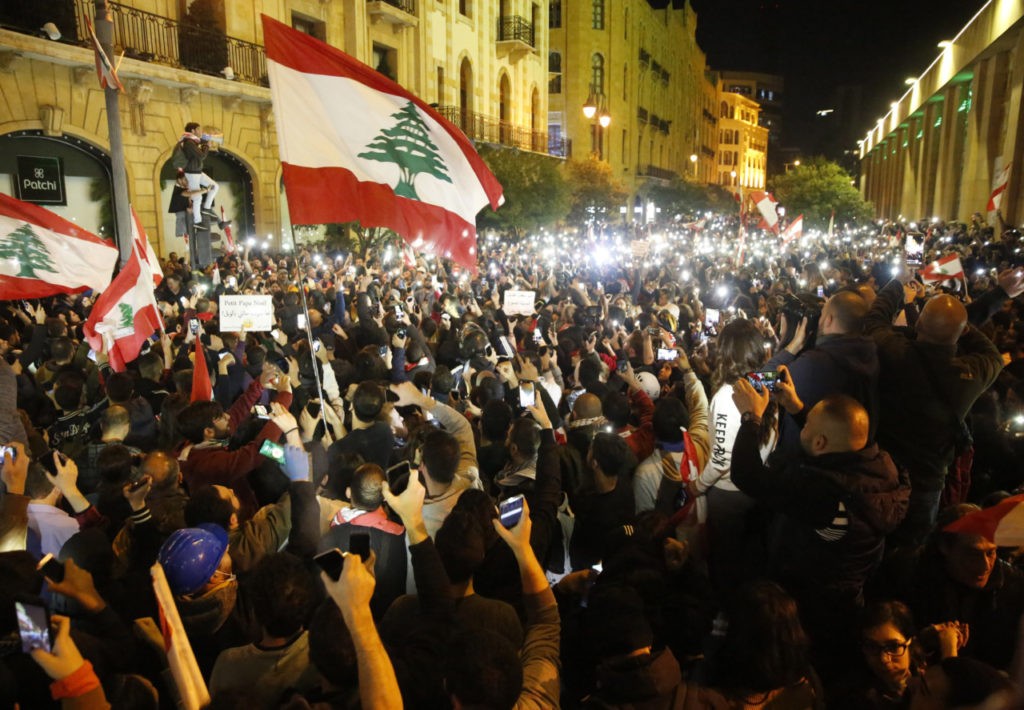 Anti-government protesters light up their mobile phones, as they shout slogans during a protest near the parliament square, in downtown Beirut, Sunday, Dec. 15, 2019. Lebanese security forces fired tear gas, rubber bullets and water cannons to disperse hundreds of protesters for a second straight day, ending what started as a peaceful rally in defiance of the toughest crackdown on anti-government demonstrations in two months. (AP Photo/Hussein Malla)

“I came back today to pressure the parliament to make the right choice tomorrow and choose a prime minister from outside the political parties. If they don’t choose someone acceptable, we will be back to the streets again and again,” said Chakib Abillamah, a businessman who was demonstrating Saturday when violence broke out.

Another protester, Huda Kerbagi, said she expected violent protests for some more days, warning that violence will beget violence, particularly in a diverse society like Lebanon. “In other revolutions you have one bloc against one bloc and in this country we have many blocs.”

One protester from southern Lebanon, who gave his name as Ali, said he came to the Beirut protest to change the rulers because “none of them feels their offenses or have any conscience. Not one of them offered an apology.”

Saturday night into Sunday saw one of the most violent crackdowns on protesters since nationwide anti-government demonstrations began two months ago. The overnight confrontations in Beirut left more than 130 people injured, according to the Red Cross and the Lebanese Civil Defense. The Red Cross said none of the injured were in serious condition and most of them were treated on the spot.

In one attack, assailants broke the windows and set fire to the local office of Hariri’s political party in the town of Kharibet al-Jundi in the northern Akkar district. Photos circulated on social media of shattered glass and the aftermath of the fire.

In a separate attack also in Akkar, assailants stormed the local office of the largest party in parliament, affiliated with President Michel Aoun and headed by Foreign Minister Gebran Bassil. The party said the contents of the office in the town of Jedidat al-Juma had been smashed and burned.

Interior Minister Raya al-Hassan on Sunday ordered an investigation into the Beirut overnight clashes, which she said injured both protesters and security forces. She said she watched the confrontations “with concern, sadness and shock.”

Al-Hassan blamed “infiltrators” for instigating violence and called on the demonstrators to be wary of those who want to exploit their protests for political reasons. She didn’t elaborate.

The head of the Internal Security Forces, Maj. Gen. Imad Osman, turned up at the protest rally Sunday. He told reporters on the scene that the right to protest was guaranteed by the law. “But calm down, no need for violence,” he said, appealing to protesters.