The latest target of the Chinese Communist Party’s anger is the Tiffany & Co. jeweller, accused of tacitly supporting the Hong Kong protest movement by publishing an advertisement depicting a Chinese model holding a hand over one of her eyes.

Chinese social media, which is controlled by the regime, accused Tiffany of either deliberately or unwittingly echoing a gesture used by Hong Kong protesters to call out police brutality. Protesters have been covering one eye or wearing eyepatches to show their solidarity with a woman who was severely injured in the eye during a confrontation with police. 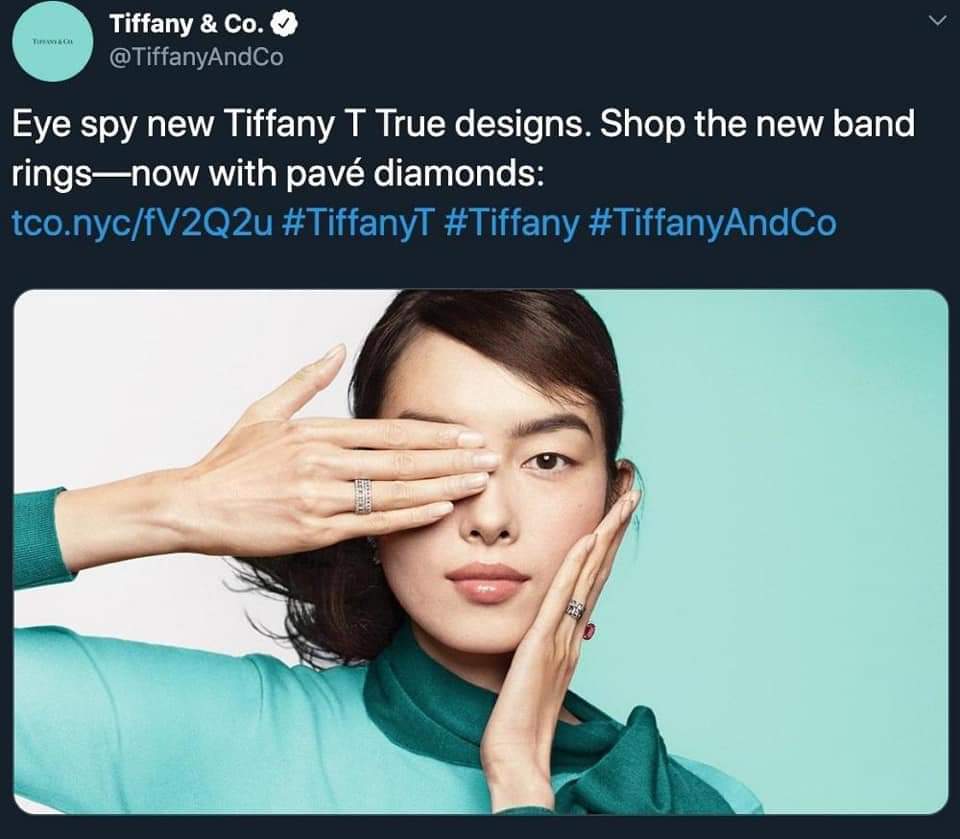 The Tiffany ad campaign riffs playfully on the phrase “I spy with my little eye” to show off the company’s latest jewelry offerings. The ad denounced by Communist China depicts model Sun Feifei covering her right eye with her right hand to show off a ring she is wearing. The ad copy reads, “Eye spy new Tiffany T True designs. Shop the new band rings – now with pave diamonds.”

The Hong Kong Free Press noted other ads in the campaign use non-Chinese models covering their eyes in various ways to play with the “eye spy” theme. A Tiffany representative noted the photo of Sun Feifei used in the ad was taken in May, before the Hong Kong protests began.

Company CEO Alessandro Bogliolo has publicly complained about the negative impact of the protests on his company’s business, which Hong Kong accounts for a remarkably large share of despite its small size.

Tiffany nevertheless offered the sort of groveling apology issued by other Western companies subjected to China’s “sharp power” and promised to pull the ad immediately, apologizing for any negative feelings it might have caused.

A typical criticism from an alleged Chinese user quoted by the Hong Kong Free Press read, “I used to be your hardcore fan, but now I’m a Chinese first and foremost. I love my country and I won’t allow her to receive any defamation or violation.”

Others allowed for the possibility that Tiffany did not understand the political significance of the hand-over-eye gesture but still criticized the company for its “insensitivity” in running the ad campaign.

For their part, Hong Kongers are denouncing the Vans shoe company for a hasty and poorly-explained decision to pull the most popular design submitted to a custom sneaker contest because it included images of Hong Kong protesters.

Vans is running a design competition called “Custom Culture,” with a $25,000 prize for the winning submission to be awarded in December. The ten finalists for the prize are to be determined by their popularity with customers.

By far the most popular design to date was submitted by a Canadian artist using the name “Naomiso.” Naomiso’s design included Hong Kong protesters wearing yellow helmets and gas masks. It racked up over 140,000 votes, while the second most popular entry received a little over 10,000.

Despite its runaway popularity, the Naomiso shoe design suddenly vanished without explanation last weekend. Another design referencing the Hong Kong protests submitted by a user in the United Kingdom disappeared at around the same time.

Only after facing a public outcry did Vans explain why the top vote-getter in its competition was unceremoniously yanked off the company website. According to Vans:

As a brand that is open to everyone, we have never taken a political position and therefore review designs to ensure they are in line with our company’s long-held values of respect and tolerance, as well as with our clearly communicated guidelines for this competition.

“Which part of the design goes against the principle of ‘celebrating creativity and spreading positivity?’” a skeptical user shot back on the company’s Facebook page, accusing the company of violating its stated principles with the “disappointing” and “unacceptable” decision to pull the design.

Furious Hong Kongers assumed Vans was either pressured by China or fearful of a backlash from the Chinese market. Vans and its parent VF Corporation see Communist China as a huge growth market, with Vans enjoying a 17 percent increase in revenue from sales there over the past year.

Hong Kong social media users discussed responses ranging from demonstrations at Vans stores to boycotts, destroying their Vans shoes in protest, or making their own sneakers with designs similar to the Naomiso submission. Several Vans outlets in Hong Kong were reportedly closed over the weekend.