NORTH CANTON, Ohio — It’s the day before the Ohio Republican primary in the 16th Congressional District, a region that is the quintessential “Trump Country” of the nation: Blue-collar folks who are fed up with being put last by their public servants.

The day before, 29-year-old Christina Hagan (who is pregnant with twins) and her flock of young staffers ran home to the suburbs of Purma, Ohio talking to voters the old-fashioned way. Hours before door-knocking, Christina and her staff waved and passed out candy in a local Polish-American pride parade.

“A lot of people were clapping for us and telling us they were voting for Christina,” one of the staffers told me. “We only got one middle finger,” the staffer joked.

Though the “America First” movement is often described by the media establishment as driven by male energy. In northeast Ohio, that is certainly not the case.

Christina is a young millennial mother who had her first child while in the State House of Representatives in Ohio. She worked as a waitress at a local Italian restaurant to pay off her student loan debt while she was pregnant with her first child and in the state legislature.

She is the daughter of the anti-establishment, economic nationalist movement looking to drive the GOP establishment out of work.

“When I first brought my daughter to Colombus with me, they treated me terribly,” Christina told me about the party establishment that has been fighting her since she entered public office.

A photo taken by a local Ohio photographer captured the essence of Christina Hagan perfectly, depicting her among a sea of men with a child in her arms, doing what the establishment Republican party said she could never do. 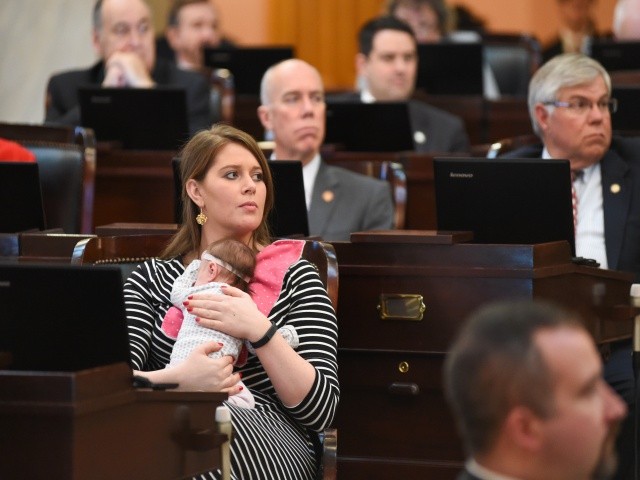 Courtesy of the Christina Hagan Campaign

Most of the time, she’s the only woman in the room. Her gaggle of staff are young, handsome, and committed to the America First agenda – three traits that are hardly seen in political campaigns.

Then again, this is Trump country, where the push for less immigration, an end to job-killing free trade deals, protection of the American citizen, and getting U.S. troops out of foreign wars lead the fight. It’s America First all the way, all the time – a motto that’s uncommon in the halls of Washington, D.C.

“The average person connects extremely well with me,” Christina says. “Most Republicans, Democrats, and Independents are blue-collar people who believe in this agenda.”

Indeed, GOP voters do believe in that agenda and the passion for putting Americans first is as potent today in Ohio as it was in Trump’s 2016 presidential election.

Christina’s biggest campaign asset is a green-eyed, 19-year-old University of Akron, Ohio student named Brian. Two years ago, Christina came to his high school (also her alma mater) and spoke to his class about state government.

A week after graduating, Brian went to work for Christina in the Ohio state House.

“I connected with everything that she was saying,” Brian told me about the first time he met Christina in his classroom.

“Just the fact that she was where we were from,” he said. “This is a white-collar world and we’re blue-collar people. She came from the same high school as me and grew up in the same area as me. For that reason, I knew this was a calling.”

The enthusiasm around Christina is not confined to her personal staff of admirers.

A local Tea Party activist and Trump supporter, Charlie Giunta, recently showed his support for Christina and her America First policy agenda by waving an American flag next to a “Hagan for Congress” sign off a local bridge above a busy interstate.

While Christina’s supporters are as excited about her as they are about Trump, the corporate donors and GOP establishment are spending more than a million dollars to stop her from making it to Congress.

Last week, Breitbart News noted how the Chamber of Commerce recently dropped $300,000 into the race to defeat Christina and support her Sen. Marco Rubio (R-FL)-backed opponent, Anthony Gonzalez, who says he has a “man crush” on “Never Trump” leader Sen. Ben Sasse (R-NE). Gonzalez moved to the 16th District to run for the congressional seat after living in California.

“I’ll never forget the day when some of the big donors announced they were supporting Anthony Gonzalez, who had just flown home from San Francisco,” Christina says of her complete rejection by the corporate lobby and GOP elite.

“I cried, not the tears of emotion, but the tears of fury,” she says. “I just remember thinking, standing over the sink, saying to myself how the establishment party doesn’t care at all about the people that we serve.”

Christina says she was freshly reassured by a voter, who solidified why she is fighting on behalf of the America First movement.

“One voter said, ‘I don’t think the party has given you a fair shake,'” she says. “When one person like that sees that you’re a fighter even through all the dark money, it’s very powerful.”

Since Trump’s victory, there have been many Republicans who have attempted to paint themselves as America First candidates despite their record of Paul Ryan Republicanism.

Take establishment Republican Ed Gillespie, who ran for Virginia governor last year and lost to his Democrat opponent, Ralph Northam. Gillespie claimed to support Trump’s agenda, but only hinted at that support with a campaign ad opposing sanctuary cities for illegal aliens. In the end, the voters did not buy it.

Christina says she’s had to put up with that same phoniness in her own congressional race, mentioning how when Trump came to Ohio a few days ago, the crew of Never Trumpers who fought his candidacy were suddenly vying for front row seats to hear him speak.

“Those same people push to the front of the room to see him in Ohio when they worked so hard to try to defeat him,” Christina says of the party establishment.

If there’s a resounding theme about Christina’s campaign for Congress, it’s that she wants voters to send a message to the GOP establishment that young-blooded America First candidates will not be stopped in their effort to defend citizens at all costs against a well-connected elite who realize that they’ve forgotten the working and middle class of America and simply don’t care. Her staff repeats this theme in conversations as well.

“Tomorrow is every American getting to stand against the establishment that’s taken control of our lives,” Christina told me before jumping in a van to continue door-knocking for votes. “We’re going to Washington and they’re going to have to deal with the voice of the American people.”