Football legend turned U.S. Senate candidate, Herschel Walker is getting a big boost to his campaign. The Georgia Bulldog was recently joined on the trail by the Mama Grizzly.

Palin wrote, “Great to see Herschel Walker again first met the Heisman winner nearly 3 decades ago ~ howz he not age honored to intro him to AZ friends all agree he’s going to be a GREAT US Senator! Thank you, State of Georgia, for sharing this most patriotic hero with the rest of America.”

While Walker is running in the state of Georgia, he has become a national political figure of late. The former NFL player who spent time with the Dallas Cowboys, Minnesota Vikings, Philadelphia Eagles, and New York Giants, has stumped for President Trump, appeared on countless talk shows, and made his presence known on social media. Palin knows a thing or two about that. 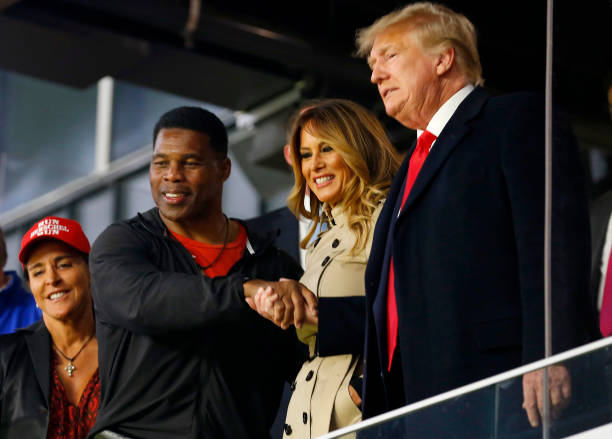 ATLANTA, GEORGIA – OCTOBER 30: Former football player and political candidate Herschel Walker interacts with former president of the United States Donald Trump prior to Game Four of the World Series between the Houston Astros and the Atlanta Braves Truist Park on October 30, 2021 in Atlanta, Georgia. (Photo by Michael Zarrilli/Getty Images)

In the Instagram videos, Palin presents a mash-up of cuts of Walker speaking. Walker is seen with Palin. The slogan ‘Run, Herschel, Run’ appears, as do still shots of Walker’s days of rushing all over the SEC. All of it is enhanced with a music bed of The Star-Spangled Banner.

In the first montage posted, Walker says “You can never outwork me.” He’s certainly proven that over the years.

“Get people in office that’s not a politician,” Walker says, summing up his Trump populism in a Palinesque way. America was built on a lot of great minds, Walker tells those in attendance. “Black, white, yellow, green, all of these great minds, God had put them in a pot and stirred them up to come out with this beautiful country called the United States of America.” 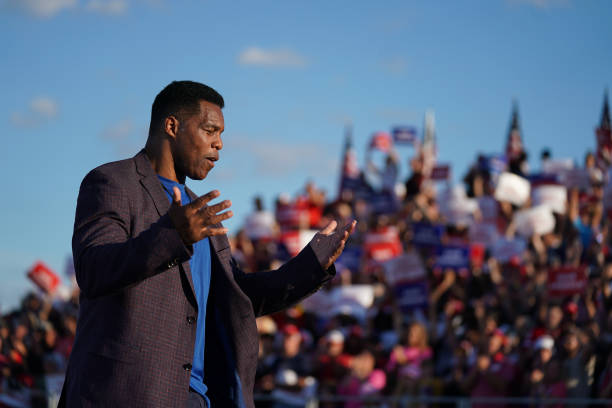 Walker is looking to unseat ultra-liberal Senator Raphael Warnock in the Peach State. Warnock infamously said, “nobody can serve God and the military”. He has also called police officers “gangsters and thugs”. To put it mildly, Walker is the anti-Warnock.

In both videos, Walker has a strong message for those with an anti-America mindset like Warnock. “If you don’t like it, leave,” Walker suggests.

Palin adds some great still shots in the second reel, including one of Walker with Trump, as well as pictures of some military heroes near and dear to Palin’s heart. Palin cousin JD Morgan and Dakota Meyer are among those featured.

Herschel Walker began his pro gridiron career with the USFL’s New Jersey Generals. The team was owned by one Donald J. Trump. Next year, the USFL is set to relaunch after a decades-long hiatus. The Georgia Bulldogs are the number one team in college football. The last time they won it all, was 1980 when Walker was setting records out of the Athens backfield. Things have come full circle. Now, the USFL and the ‘Dawgs have a chance to be great again. Meantime, Mr. Walker looks to go to Washington to help, as he puts it, “get this country back together.” With lead blockers like Palin and Trump in front of him, there’s no reason why he can’t hit paydirt.