A horde of left-wing Hollywood elites piled on Sen. Ted Cruz (R-TX) following reports that he was on a plane headed to Cancun alongside his family in the midst of the crisis in Texas, bashing him as a “worm” and a “motherf***er.” 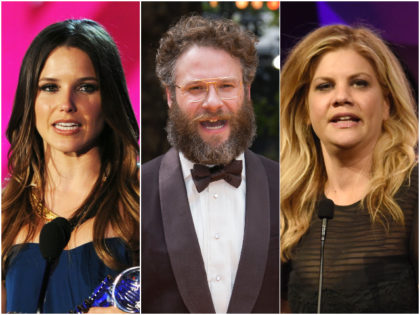 Hollywood celebrities flew into a paroxysm of rage on Saturday after the Senate acquitted former president Donald Trump of inciting the Capitol Hill riots of January 6. Left-wing stars lashed out at the 43 Republicans who voted to acquit, calling them “traitors” and “fascists.” 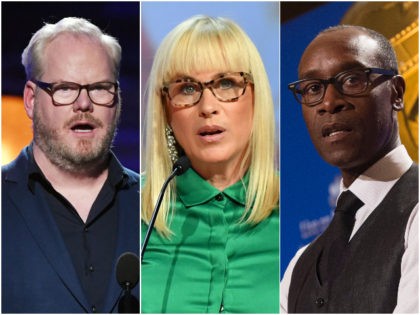 Alyssa Milano After Trump Acquitted: ‘It Is a Sad Day in America’

Left-wing actress-activist Alyssa Milano expressed disappointment, particularly with Senate Republicans, after the Senate voted to acquit former President Trump from the charges of inciting insurrection, concluding that they lacked the patriotism and integrity “to convict a tyrant” and adding that courts will now have to absolve the left’s grievances. 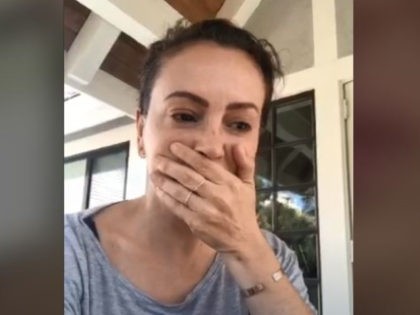 Now that His Fraudulency Joe Biden has already killed the Keystone XL Pipeline, a mob of super-wealthy Hollywood hypocrites are calling for His Fraudulency to kill the Dakota Access Pipeline. 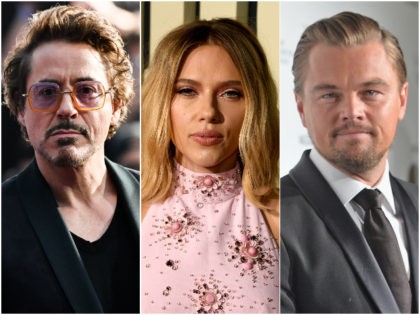 Left-wing actress and activist Alyssa Milano took to Twitter on Wednesday to push forward impeachment in Spanish, imploring her 3.7 million followers to help make former President Donald Trump “go down in history as the worst president of all time.” 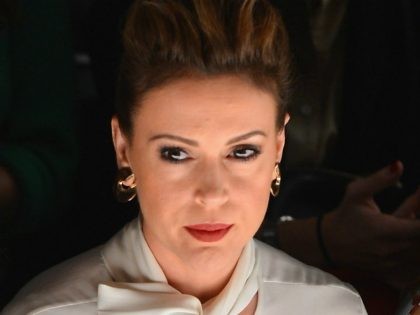 Hollywood celebrities were glued to their TVs as the Senate kicked off its impeachment trial of  Donald Trump on Tuesday. The stars took to social media to live tweet their feelings, which included contempt for Trump’s defense team and a desire to see the former president convicted as early as possible. 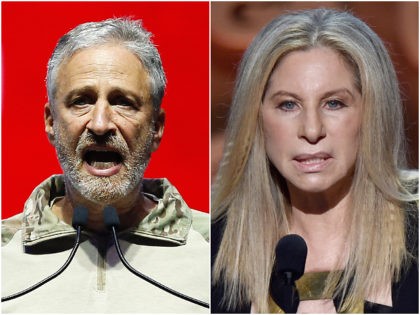 Left-wing actress and Democratic Party activist Alyssa Milano is hosting an impeachment call on the eve of the Senate impeachment trial against former President Donald Trump, where she is expected to discuss why it is essential that U.S. senators both convict Trump and disqualify him from being able to run for office ever again — a primary objective previously outlined by Senate Majority Leader Chuck Schumer (D-NY). 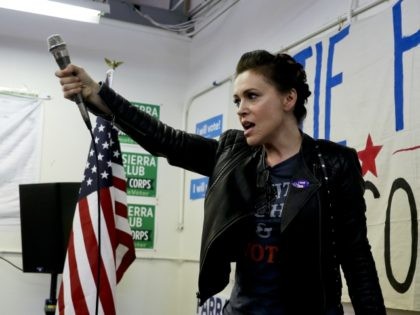 41 Hollywood Celebrities Who Tweeted Support for The Lincoln Project

For months, left-wing stars have tirelessly boosted the anti-Trump Republican organization by spreading its viral videos and whipping up enthusiasm on social media. Now their devotion is being tested after the New York Times reported Sunday on accusations that Lincoln Project co-founder John Weaver sent explicit messages to nearly a dozen young men, offering them career advancement in exchange for sexual favors. One of the men claims he was 14-years-old when Weaver sent him inappropriate messages. 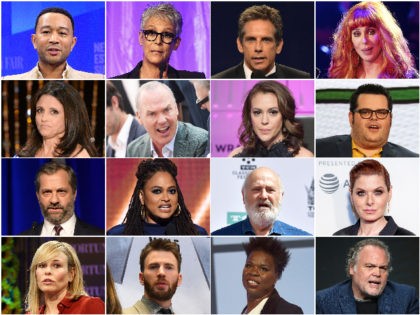 Alyssa Milano, Dave Bautista Push Effort to Expel Ted Cruz: ‘This Cause Is Close to My Heart’

Actors and left-wing activists Alyssa Milano and Dave Bautista took to social media on Sunday to push the effort to expel Senator Ted Cruz (R-TX) after he objected to certifying the electoral college votes in at least one state on January 6, a move that left-wing activists say equates to “treason and conspiracy to incite” an “armed insurrection in Washington.” 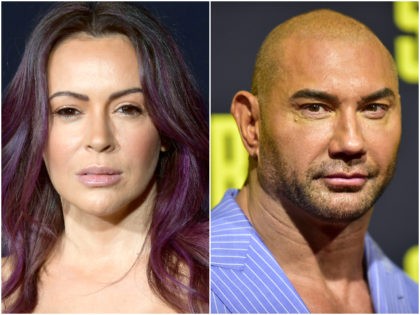 Actress Alyssa Milano tweeted to her 3.7 million Twitter followers her very own legislative agenda that Democrats in Congress should “pass ASAP” on Wednesday, which included the “George Floyd Justice in Policing Act,” among others. 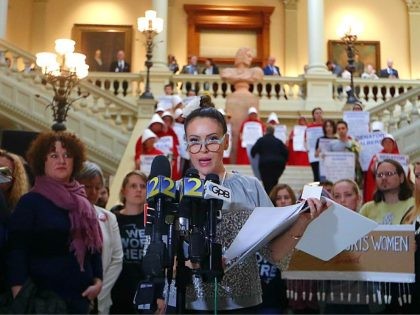 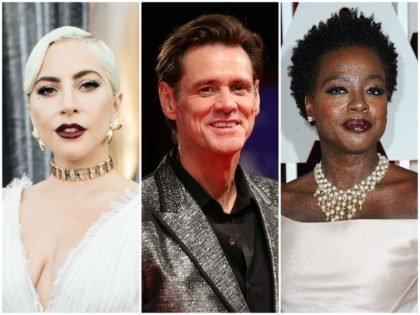 Alyssa Milano: A Mask Will Protect You More Than an AR-15 Will

Actress Alyssa Milano said that people who merely disagree with mask mandates or the efficacy of them are the same people who “think they need an AR-15 for ‘”protection.'” 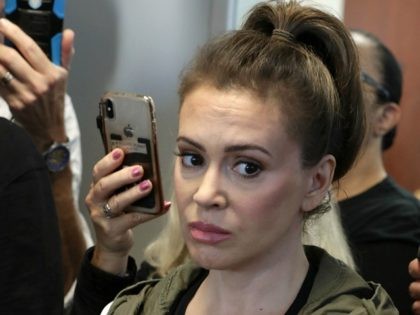 Leslie Jones: Raphael Warnock, Jon Ossoff Give Me Most Hope I’ve Had Since MLK and JFK

“Coming to America 2” actress and “Supermarket Sweep” host Leslie Jones helped lead a fundraising event for Georgia Democrat candidates Raphael Warnock and Jon Ossoff, during which she seemed to suggest that the pair give her a kind of hope in the political process that’s reminiscent of Martin Luther King, Jr. and John F. Kennedy. 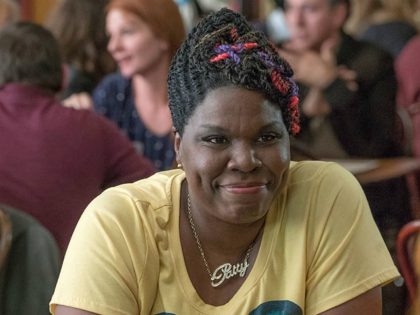 The owner of trendy Los Angeles retailer Kitson is blasting California Gov. Gavin Newsom (D), L.A. mayor Eric Garcetti (D), and a slew of celebrities including Alyssa Milano and Chrissy Teigen for what he sees as their indifference to the plight of small businesses during the coronavirus pandemic and Black Lives Matter riots. 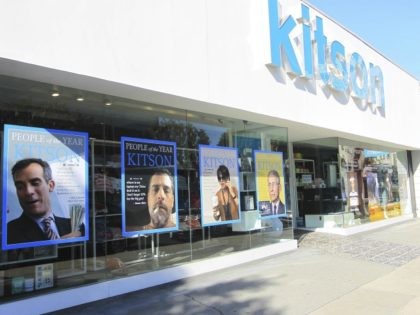 Hollywood Celebs Rejoice After SCOTUS Rejects Texas Election Lawsuit: ‘Clean Out Your Desk And Put Your Fat Ass on the Street’

Left-wing Hollywood celebrities gloated after the Supreme Court rejected the Texas lawsuit against four battleground states on Friday, referring to President Donald Trump as a “loser” and “f**king dummy” who should clean out his desk and “put your fat ass on the street.” 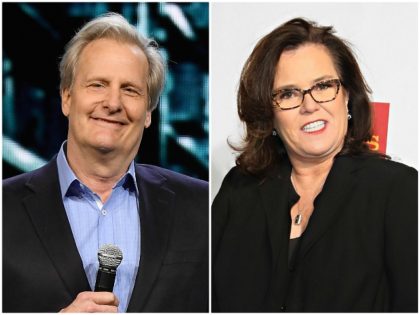 Hollywood Celebrities Rally Behind Raphael Warnock: ‘Soul of Our Democracy Is at Stake’

Left-wing Hollywood celebrities are rallying behind Georgia Senate candidate Raphael Warnock (D) as the candidate faces growing criticism for his relationship with the late Cuban Communist dictator Fidel Castro, whom he eulogized in 2016. 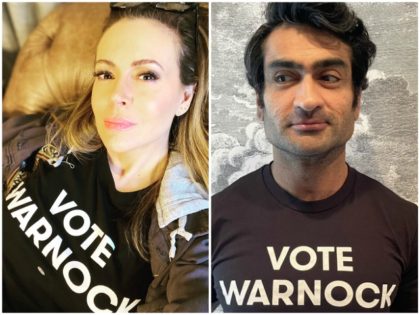 While American businesses continue to feel the economic impact of being forced to close their doors amid the coronavirus pandemic, one popular clothing and accessory store in Los Angeles is standing up to any “political elite that is a hypocrite” with a unique window display. 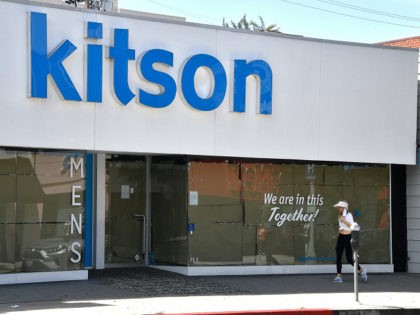 How much do Hollywood stars really care about Georgia? Here is one indication: Some of the same celebrities who threatened to boycott Georgia over its so-called “fetal heartbeat” abortion bill are now carpetbagging their way through the Peach State to support Democrat candidates for the Senate runoffs. 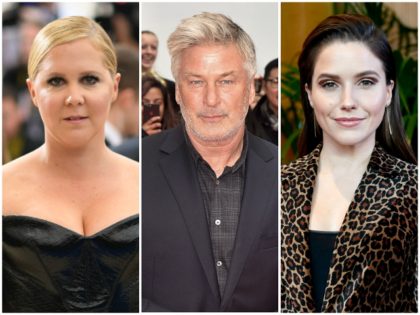 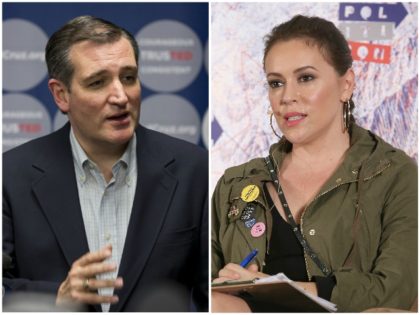 Time’s Up, the anti-sexual harassment organization created by Hollywood celebrities in the wake of the Harvey Weinstein scandal, has spent big bucks on executive salaries but has skimped on helping actual victims, according to a new report. 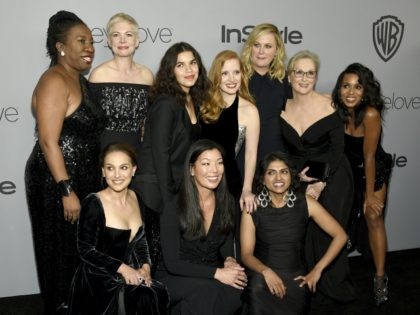 Georgia is now ground zero for the battle for the balance of power in Washington, D.C., as control of the U.S. Senate now hinges on the outcome of the two Senate runoff races. With the Senate majority leadership just a couple seats away, Sen. Chuck Schumer (D-NY) recently declared, “Now we take Georgia, and then we change America.” And failed Georgia gubernatorial candidate and Democratic Party power player Stacey Abrams is more than willing to do her part to see that Schumer’s goal is realized. 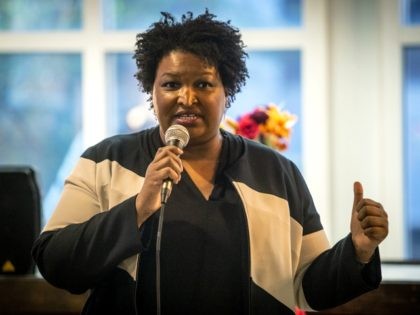 It was just a couple months ago that Alyssa Milano was calling for Republicans to be “tried for treason.” And now, just weeks removed from the election, and after years of smears and attacks, the left-wing activist and actor is ready to “extend an olive branch to Trump supporters.”

Actress and Joe Biden surrogate Alyssa Milano has made an immigration-themed Christmas movie in which a young girl finds herself parentless and homeless after her mother, who is an illegal immigrant, is kicked out of the country. At one point, a character rails at the injustice of it all, calling the U.S.-Mexico border “an imaginary line.” 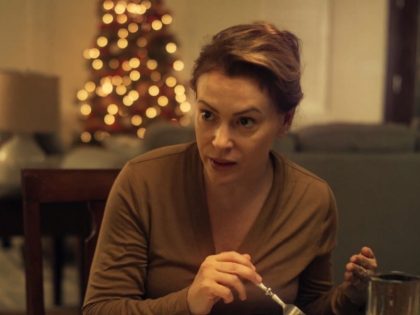 Left-wing activist and actress Alyssa Milano took to Twitter in 2018 to warn her followers about electronic voting machines and how easily they could be hacked, stressing the need for paper ballots. 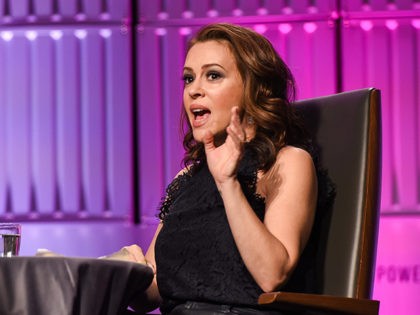 Ron Perlman: ‘I Feel Like Lindsey Graham Is Ripe for an A** F**king’

Joe Biden has pushed a message urging healing in America. Yet, some of his most ardent supporters in Hollywood aren’t heeding his call. Take actor Ron Perlman. The “Pinocchio” and “Hellboy” star is the latest celebrity to attack conservatives, taking to Twitter on Tuesday to fantasize about a sexual attack on Sen. Lindsey Graham (R-SC). 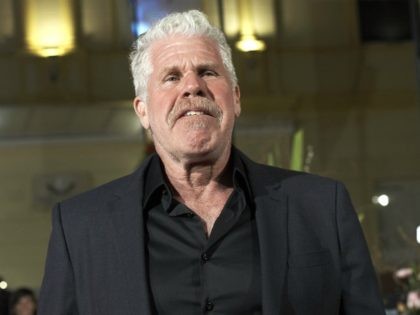 Liberal Hollywood continues to bear down on Georgia’s runoff elections with the gale-force winds of its messaging machine, hoping to sweep Democratic Senate challengers Jon Ossoff and Raphael Warnock into office. The latest effort is a new viral ad from novelist-screenwriter Don Winslow and actor Jeff Daniels that equates the two candidates to Robert F. Kennedy, Jr. and Martin Luther King Jr., respectively. 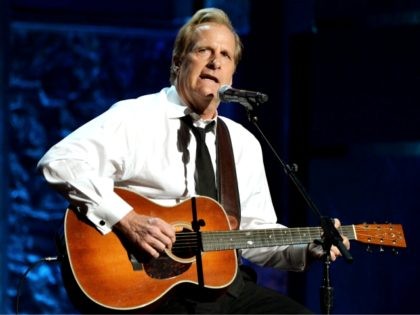 From Phone Banking to Fundraising, Hollywood Celebs Go All in to Flip Georgia Senate Seats

Some of Hollywood’s most vocal leftists continue to go all in for the upcoming Georgia Senate election, with efforts to call up voters and fundraising in the hope of flipping both seats from Republican to Democrat in the runoff election in January. 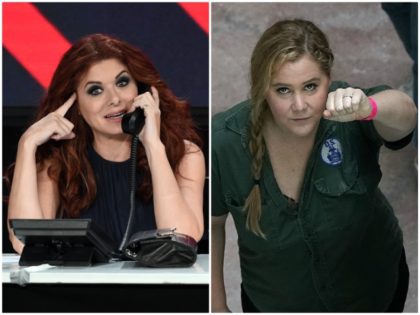 Alyssa Milano: ‘America or Trump, You Can’t Love Both’ 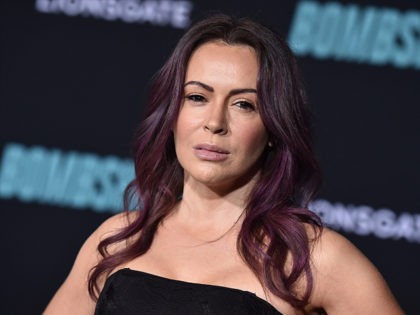 Hollywood Celebs Rage at Trump, Gush Over Biden During Final Debate: ’45 Is an Evil Person’

Left-wing Hollywood celebrities raged against President Trump and played defense for Joe Biden during the final presidential debate on Thursday. 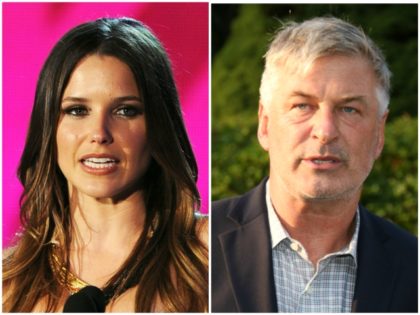 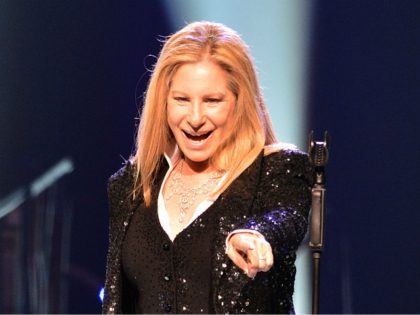