During a hearing before the Senate Commerce Committee yesterday, Twitter CEO Jack Dorsey alleged that his platform had never censored President Trump, a claim which is provably false.

Yesterday, during a hearing before the Senate Commerce, Science, and Transportation Committee, the CEO’s of Facebook, Twitter, and Google discussed their various platforms and allegations of censorship. During the hearing, Twitter CEO Jack Dorsey alleged that his platform had never censored President Donald Trump.

“We have not censored the U.S. president,” Dorsey echoed. “We do not take down the tweets but we add context around it.” However, numerous examples of the President being silenced on Twitter can easily be found.

In June, Breitbart News reported that a parody video posted by President Trump was removed from the platform. Breitbart News reporter David Ng described the video stating: “The video showed two toddlers — one black, one white — embracing and playfully running after each together, with a parody CNN chyron speculating that the white toddler might be a racist Trump supporter.”

Twitter added a “manipulated media” fact-check label before the video was removed from the platform. In August, Twitter further hid tweets from President Trump raising concerns over mail-in voting. Breitbart News wrote at the time:

Earlier today, President Trump tweeted that mail drop boxes are a “voter security disaster,” that allow people to vote multiple times. The president also warned that the mailboxes are not sanitized to prevent the spread of the Chinese virus.

Jack Dorsey’s company has now hidden the tweet behind a filter, warning users about “misinformation.” Users who attempt to view the message on Twitter will see the following message:

In October, Twitter censored the President’s tweets about his own recovery from coronavirus. Breitbart News reported at the time:

Twitter accused this simple message from the President of spreading “misleading and potentially harmful information related to COVID-19,” and has hidden it behind a warning message that users must click through in order to access the tweet. 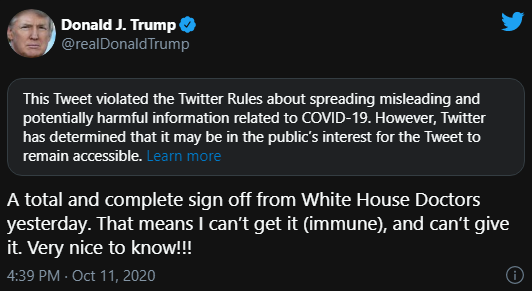 Blackburn stated: “You said Holocaust denial and threats of Jewish genocide by Iran’s terrorist Ayatollah do not violate Twitter rules and it’s important for Iran’s leaders, like their terrorist leader, to have a platform on Twitter.”

She added: “You have testified you are worried about election interference. That is something we are all worried about. For about 100 years, foreign sources have been trying to influence U.S. Policy and U.S. Elections. Now they are on your platforms. They see this as a way to get access to the American people.”

Read more about the hearing at Breitbart News here.

Lucas Nolan is a reporter for Breitbart News covering issues of free speech and online censorship. Follow him on Twitter @LucasNolan or email him at lnolan@breitbart.com