Harvard Law Professor Laurence Tribe was taken to the woodshed over his abortion advocacy that radically distorted statistics relating race to abortion.

Tribe tried to link opposition to abortion with white supremacy, suggesting that abortion proportionately affects the white population more than people of color, which is exactly backwards.

“White Supremacists oppose abortion because they fear it’ll reduce the number of white infants and thus contribute to what they fear as non-white ‘replacement,’” Tribe tweeted Sunday. “Never underestimate the way these issues and agendas are linked. This turns ‘intersectionality’ on its head.” 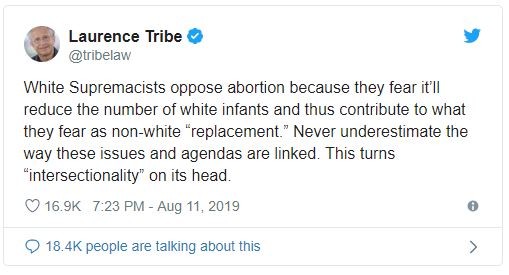 Writing for National Review, pro-life advocate Alexandra DeSanctis was quick to correct Tribe, noting in an essay Tuesday that (1) people of color have abortions at some three times the rate of whites, and (2) white supremacists tend to be pro-abortion, precisely because they know that this procedure disproportionately reduces the numbers of the non-white community.

“An African-American woman is nearly three times as likely as a white woman to have an abortion, according to pro-choice research group the Guttmacher Institute,” Ms. DeSanctis notes. “Centers for Disease Control data indicate that African Americans accounted for 36 percent of abortions in 2015 despite being only about 13 percent of the population.”

As a “blind defender” of the right to kill unborn human beings, DeSanctis notes, Tribe simply disregards or distorts these facts to suit his agenda.

Regarding the position of white supremacists on abortion, DeSanctis provides equally devastating facts that turn Tribe’s claims on their head.

“Richard Spencer, a leading white supremacist, is highly supportive of legalized abortion, because, as he puts it, ‘the people who are having abortions are generally very often black or Hispanic or from very poor circumstances,’” DeSanctis writes.

While white women avail themselves of abortion “when you have a situation like Down Syndrome,” Spencer claims, “the unintelligent and blacks and Hispanics… use abortion as birth control.”

DeSanctis notes that a true racist and eugenicist, Margaret Sanger, the founder of Planned Parenthood, devoted her life to discovering ways to control the birth rate among the “unfit,” namely blacks and other people of color.

“Not only is Tribe wrong about white supremacists opposing abortion, then, but he ignores the eugenic roots of the pro-abortion movement,” DeSanctis says. “The earliest advocates of loosening restrictions on abortion were closely tied to the population-control movement, and many of today’s most vigorous abortion-rights organizations spend much of their time and resources pushing abortion and contraception on women in Africa who want none of it.”

This is not the first time Tribe has made news with his off-the-wall statements. Earlier this year he compared President Donald Trump to Adolf Hitler and in 2018 registered his opposition to then-Supreme Court nominee Brett Kavanaugh, suggesting that Kavanaugh’s college sports reporting as a 20-year-old indicated that he is unfit to serve on the Supreme Court.

Kavanaugh’s fascination with high-scoring players might be a sign that he has a “muscular view of executive power,” Tribe proposed.